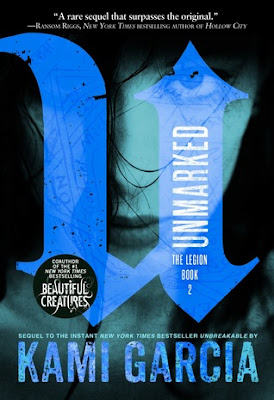 He is here... and he could be anyone.

Now Kennedy and the other Legion members–Alara, Priest, Lukas, and Jared–have to hunt him down. As they learn more about the history of the Legion and the Illuminati, Kennedy realizes that the greatest mystery of all does not belong to any secret order, but to her own family. With the clock ticking and the life of someone she loves hanging in the balance, Kennedy has to ask the question she fears most: what is it about her past that has left her Unmarked?

My Thoughts:
One of the things I absolutely adored about the first book, Unbreakable, was the Supernatural feel to it. They hunted down clues in different locations, they fought off spirits or whatever came their way. In terms of cast members it was more of a Scooby Gang, but the feel of the book was pure early days Supernatural, and it was awesome. Needless to say I was disappointed when that feeling was missing here.

While the book has a different feel to it, that doesn’t mean it lacks in excitement. There are some huge reveals that I can't really even hint around, because they’re massive spoilers that you definitely want to read for yourself. There’s a lot going on in regards to studying the history and mythology behind the Legion of the Black Dove. Because so much happened I can’t really say that Unmarked suffers from second book syndrome. What I can say is that I should have been excited by how action packed the book was, but instead I was almost bored at times because of where it ended up. I think what I missed were the quieter moments, like the conversations between Kennedy and a certain character (you might guess who, but I can’t talk about it, because, of course, spoilers).

Another thing I didn’t care for was the complete cliffhanger ending. While the first book also ended at a crazy moment, it ended in a place that the book was leading you to. The group had followed a set of clues and the book ended after the big reveal. In Unmarked, on the other hand, we’re still working towards something when the book suddenly ends. Yes, a piece of information is revealed, but plotwise we’re totally hanging off a cliff, which is not my cup of tea.

I definitely still enjoyed this book, but I didn’t love it like the first book. I look forward to where the series is going -- I just wish it had stayed closer to the first book with group antics and more conversations, instead of Kennedy being so insular.

The Cover:
Kind of meh?