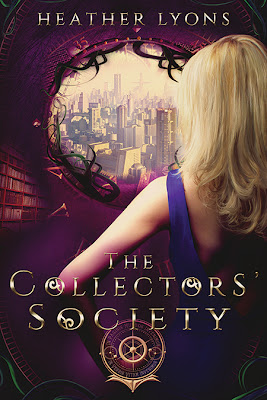 From the author of the Fate series and The Deep End of the Sea comes a fantastical romantic adventure that has Alice tumbling down the strangest rabbit hole yet.

After years in Wonderland, Alice has returned to England as an adult, desperate to reclaim sanity and control over her life. An enigmatic gentleman with an intriguing job offer too tempting to resist changes her plans for a calm existence, though. Soon, she’s whisked to New York and initiated into the Collectors’ Society, a secret organization whose members confirm that famous stories are anything but straightforward and that what she knows about the world is only a fraction of the truth.

It’s there she discovers villains are afoot—ones who want to shelve the lives of countless beings. Assigned to work with the mysterious and alluring Finn, Alice and the rest of the Collectors’ Society race against a doomsday clock in order to prevent further destruction . . . but will they make it before all their endings are erased?

My Thoughts:
I have to admit that I had a hard time with the first 20% or so of this book. It has a bit of a slow start and then it becomes very info dumpy. The thing is, it’s an info dump for Alice -- she comes into the Society with no knowledge of it and she wants to be informed. In that way, I can understand why the author wrote it that way, but it still isn’t my favourite way to be introduced to a new world. I also thought Alice was quite accepting of the Society in a little too short a time period, but I can also understand that once you've been in Wonderland perhaps anything that seems impossible is easy to accept.

After the first quarter or so of the book I found myself much more engaged in the story and in the characters. I felt like I had a stake in the story once I met the members of the Collectors' Society, getting to know them and connecting them with their stories in classic literature. There are a lot of fun references, but I think even if you don’t know the original stories the characters come from you’ll enjoy the book, because the author has made the characters her own.

I liked this completely kick butt version of Alice. She was similar to the Alice from the short-lived TV series Once Upon a Time in Wonderland. I loved how Heather presented the Alice and the Wonderland we’d expect, but that she also put a very different spin on things. I found the different aspects to be very fun and imaginative.

On the romance end of things (because yes, there’s definitely a romance), I really liked Finn and I really liked Finn/Alice. I don’t think it’s too spoilery to name them as a couple, because there’s a definite chemistry there from the beginning. What happened between Finn and Alice happened quickly, but it felt right at the same time, so I wasn't too bothered by the fast pace.

The Collectors’ Society is a great book because it offers an awesome start to a new series, but it also works well as a standalone. It fulfills some aspects of the plot, giving you resolution, while still leaving some larger things open ended. I enjoyed this book and I definitely can’t wait to read about more of Alice’s adventures. 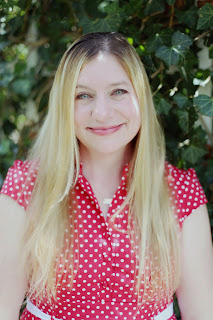 About Heather:
Heather Lyons has always had a thing for words—she’s been writing stories since she was a kid. In addition to writing, she’s also been an archaeologist and a teacher. Heather is a rabid music fan, as evidenced by her (mostly) music-centric blog, and she’s married to an even larger music snob. They’re happily raising three kids who are mini music fiends who love to read and be read to. 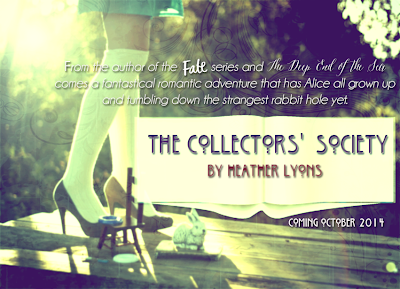 Be sure to follow along with the rest of the tour HERE.