All Fall Down by Ally Carter 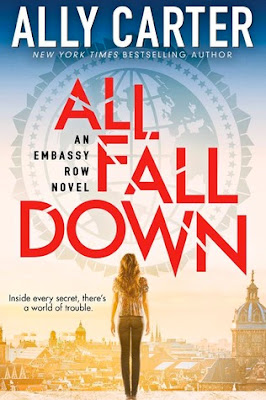 1. She is not crazy.
2. Her mother was murdered.
3. Someday she is going to find the killer and make him pay.

As certain as Grace is about these facts, nobody else believes her -- so there's no one she can completely trust. Not her grandfather, a powerful ambassador. Not her new friends, who all live on Embassy Row. Not Alexei, the Russian boy next door, who is keeping his eye on Grace for reasons she neither likes nor understands.

Everybody wants Grace to put on a pretty dress and a pretty smile, blocking out all her unpretty thoughts. But they can't control Grace -- no more than Grace can control what she knows or what she needs to do. Her past has come back to hunt her . . . and if she doesn't stop it, Grace isn't the only one who will get hurt. Because on Embassy Row, the countries of the world stand like dominoes, and one wrong move can make them all fall down.

My Thoughts:
All Fall Down was a highly anticipated title for me, as I’m sure it is for a lot of people. I was so excited to start a new series from Ally Carter, and I wasn’t at all disappointed.

Grace is a different type of heroine for Ally Carter, which I really appreciated. Grace is a lot broken. She's dealing (or not dealing) with her mom's death, she's been to a shrink, and you can just tell she’s not coping well. Grace swears that her mom was murdered, but no one will believe her, which sets up an incredibly interesting mystery.

One of my favourite aspects of the book was the setting of Embassy Row. Grace’s grandfather is the US ambassador to the (fictional) European country of Adria. I loved meeting the international kids and seeing the lifestyle there. I loved the action scenes (which we all know Ally does so well), and the conspiracy element to it.

This book has a lack of romance to it, but you can definitely see things developing in the future. That being said, it was refreshing to not have a romance plot line. I didn’t miss it at all, especially since Grace is a younger character who has way more important things to deal with. I liked that friendship was the primary type of relationship featured, especially since there was a great gang of supporting characters.

All Fall Down is a good first book in a new series. It has a whammy of a conclusion and a set up that will get you incredibly excited for Book 2. Awesome, as expected from Ally Carter. Definitely recommended.

The Cover:
Besides the girl looking intensely skinny, I love it!