I'm really excited to be hosting another guest post today, this time from fellow Canadian Rhiannon Paille. Rhiannon has sold her first book "Flame of Surrender" to Coscom Entertainment and it will be released on November 1 of this year.

Rhiannon is here on Book Labyrinth to talk about how she managed to decide what "Flame of Surrender" actually is, since it crosses a lot of different genres.

GENRE WARS! How did you choose?
by Rhiannon Paille
It was tough. Today there are so many categories for books that differ from place to place; it’ll give you a headache. Before I could even decide what genre FLAME OF SURRENDER fit into, I had to read all the descriptions for all the different genres, and then I had to choose which fit my book.

There was more than one that fit, and a few that were applicable though not entirely.

Young Adult: This is a very broad term, and it’s not used everywhere, some places like Amazon have “Teen” sections and so this is just a general slang term which means it’s for people ages 14 & Up.

Fantasy: Another wide term, this means that it likely has something to do with magic and the supernatural. It’s also dominated by medieval times, other worlds and other types of creatures, non human. It stays away from the macabre themes and is usually about quests, conquests or triumphs.
(Flame of Surrender almost fits, except for that last line about the macabre . . .)

High Fantasy: Another wide term that indicates the story is set on another planet, realm or place that is not Earth.
(Flame of Surrender takes place on Avristar, a hidden island on Earth. Almost High Fantasy)

Epic Fantasy: Another wide term that indicates the story revolves around a quest or a journey.
(Flame of Surrender is not Epic Fantasy)

Dark Fantasy: A subgenre of fantasy that deals with characters commonly seen in horror such as vampires, werewolves, or ferrymen.
(Flame of Surrender actually fits this rather well)

Paranormal Romance: A subgenre of Romance, it includes paranormal elements such as: psychic ability, fantasy, magic, science fiction or horror. The main plot revolves around a love story, and the rest adds depth, conflict and tension to the story.
(Flame of Surrender is more a Paranormal Romance than it is a High Fantasy, it fits this genre perfectly)

Dystopia: Dystopia is defined as a society characterized by poverty, or oppression. Most of the time the plot revolves around rectifying what has forced this poverty or oppression. Most stories revolve around changing society, taking down the government, rebuilding, etc. etc.
(Flame of Surrender is a dystopian by default. People are oppressed but they live with it until things have to change.)

Utopian: Opposite to Dystopian. Utopian fiction exists in a perfect world, the ideal place of perfection.
(Flame of Surrender on the outside is Utopian, and on the inside it’s Dystopian. Basically, you can live freely on Avristar if you live by the rules, but test those rules, test that peace, and you’ll find where the oppression lies.)

Urban Fantasy: Fantasy that exists in a modern day city.

Historical Fantasy: A subgenre of fantasy that deals with fantasy that exists on Earth during different periods of time.

Steampunk: A subgenre of fantasy that takes from H.G. Wells and Jules Verne of a modern day dominated by an entirely steam powered world.

Cyberpunk: A subgenre of Science Fiction that deals with futuristic technology, robots, and biomechanics.

Post Apocalyptic: Very popular in the zombie books. These ones deal with the after effects of an apocalypse, who’s still alive and how they’re going to survive.

And I think that’s it. If I missed any I’m sorry, but there are genres for everything, and since I fit into so many genres, I thought I would just explain them all . . .

What are your favorite genres to read? Which ones do you steer clear of?

Rhi was never a normal girl. She tried, but she couldn’t get rid of the visions, the voices in her head, and the hallucinations. When she was on the edge of crazy someone pulled her back and explained it all. She wasn’t insane. She was psychic, really psychic, too psychic. Her life was an urban fantasy wrapped in a paranormal romance and served with a side of horror. To escape her everyday weirdness she began writing fantasy. She frequents twitter and facebook, but if you really want to get to know her you should visit her site: www.rhiannonpaille.com

Her book FLAME OF SURRENDER (The Ferryman and The Flame #1) Comes out November 1st, 2011. Check it out here: http://www.goodreads.com/book/show/11841693-flame-of-surrender

Thanks so much for sharing all that information about genres, Rhiannon! I know I definitely enjoyed reading about them and seeing where "Flame of Surrender" fits in. 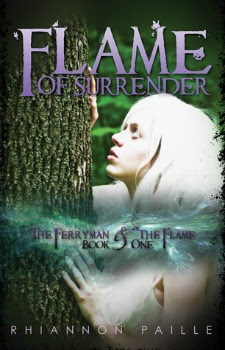 The boy who follows death meets the girl who could destroy the world.
Krishani thinks he’s doomed until he meets Kaliel, the one girl on the island of Avristar who isn’t afraid of him. She’s unlike the other girls, she swims with merfolk, talks to trees and blooms flowers with her touch. What he doesn’t know is that she’s a flame, one of nine individually hand crafted weapons, hidden in the body of a seemingly harmless girl.

Nobody has fallen in love with a flame until now. She becomes Krishani’s refuge from the dreams of death and the weather abilities he can’t control. Striking down thousand year old trees with lightning isn’t something he tries to do, it just happens. When the Ferryman dies, Krishani knows that he’s the next and that a lifetime of following death is his destiny.

And Kaliel can’t come with him. The Valtanyana are hunting the flames, the safest place for her is Avristar. Krishani can’t bear to leave her, and one innocent mistake grants the Valtanyana access to their mystical island. They’re coming for Kaliel, and they won’t stop until every last living creature on Avristar is dead. She has to choose, hide, face them, or awaken the flame and potentially destroy herself.