I'm very pleased to have author Vici Howard here today on Book Labyrinth to talk about her new series "The Chick Friends Rules!". Vici was also generous enough to offer up a copy of the first book for giveaway, so be sure and enter for that below after reading what Vici has to say.

There’s always more to look forward to…
Writing a book series by Vici Howard.
I’m beginning to speculate that writing a series is almost always by accident. It always starts out with an idea brewing and then it grows. Sometimes writers have so much to say and finding the balance between storytelling and walking the practical tightrope of industry standards may have something to do with the conception of a series.

My series novel, The chick friends rules came about unintentionally. It was intended to be one book, but as the plot thickened and the characters developed plus I exceeded the 80k word YA criterion, so it made sense to extend the story from freshman year to senior year. To truly explain the process I’d have to go back even further to the origin of the story.

One day, my 13 year old son (now 16 and super cute) came home and told me his chick friend confided in him that she was being molested by her stepfather and her mother didn’t believe her. My mouth hung open as he matter-of-factly told the story while eating a bowl of Cinnamon Toast Crunch. As a mother and a woman I swung into action and wrote an anonymous letter to the school and the district giving crucial information in my effort to help this child. Happily, she was taken out of the home and the school and placed with relatives in another state; for three weeks. I was heartbroken to learn the system sent her back home to her abuser. She told my son she was vilified by family members for “breaking up the family and starting trouble”. So, she went back home and endured molestation as the family protected the abuser. At this point I’m mad as heck and plotting a drive-by smack upside the head to the girl’s mother. Realizing this wasn’t an option, I began to write. This young girl has become my muse and it was my mission to give her and other victims a voice. But, as I read my first draft I realized, an entire novel based on molestation was too heavy. So, I began the rewrite but this time from the point of view of the platonic male friend and classmate.

By the end of the first book, I was so enthralled in the characters that it would have been a disservice to stop. The funny thing, I had no prior knowledge as to how the story was going to turn out until I sat down and got into the flow of writing. I surrendered to the whim of the characters and let them guide me.

On the practical side, I realize now that writing a series makes good business sense for the writer, if a writer does her job well she can create a franchise where there’s already a built in audience; no pondering ideas for the next book, and the potential for spinoff books. Elaborating on the spin off idea, I’m contemplating a tantalizing adult cross over novel using a subplot in Chick friends involving the love triangle between the parents. The possibilities are limitless.

The only downside I’ve stumbled into in regards to writing a series is marketing. Settling on a release date for the subsequent novel have left me baffled. Should it be a year…6 months… one month? Industry releases are usually annually but I don’t have an industry marketing budget where I can afford to spend a massive amount of promotion resources reacquainting my readers with the book again. I’ve chosen to release the books the moment the editing process is done which is typically a couple of months. Freshman year and sophomore year are now available on Amazon.com and BarnesandNoble.com, junior year will be released by Halloween and senior year in December. I chose to release them all in the same year because I don’t want my readers to have a cooling off period where they “get over it” and move on to another book (that could be my paranoia). I want to grab them while they’re still interested and eager to learn what happens to their favorite characters. This process has been one of my most rewarding accomplishments, I feel proud for taking the leap of faith.

Thanks so much for stopping by, Vici! I really enjoyed reading your thoughts, and it is definitely a great accomplishment to write a single book, let alone a whole series.

You can find out more information about the novels on thechickfriendsrules.com, but for now here is the synopsis of "The Chick Friends Rules!: Freshmen Year": 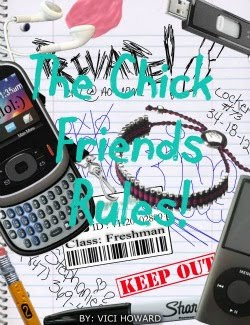 Fifteen-year-old Grant Lee is a "cool kid" who is popular with the girls. He adheres to the strict code of the “chick friend hierarchy”. There are girls a guy thinks about when he's in his bedroom alone and girls a guy farts around.

Grant is friends with Marta, the latter in the "chick friend hierarchy". She is an intriguing but slightly overweight Latina with a story of her own. They have a good time hanging out and have shared some secrets, which have brought them even closer; she’s a victim of molestation at the hands of her stepfather and he has just learned his mother is cheating on his stepfather with his biological dad.

Grant is faced with an embarrassing dilemma; he has a secret crush on Marta but is ashamed to tell his friend because she’s the “fat girl”. If his secret gets out it could be social suicide for Grant.

So, he goes out of his way to conceal his feelings for her by making a series of bad choice and by engaging in risky behavior. When he gets the courage to tell her his true feelings, she mysteriously vanishes.

And now for a giveaway! 1 person will win a paperback copy of "The Chick Friends Rules!: Freshman Year".

- Enter through the Rafflecopter below
- Open to US/Canada addresses only
- Giveaway will end September 27th at 12:01 AM EST
- Winner will be contacted by email and will have 48 hours to respond