The Way We Fall - New Cover

You may remember that I posted my review of Megan Crewe's 2012 release "The Way We Fall" back in August. Well I loved the book, but I wasn't totally sold on the cover.

Apparently the publishers weren't either, because as Megan revealed on her blog today, the book has a new official cover: 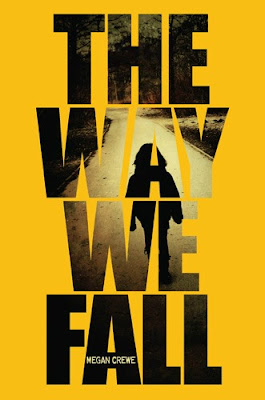 What do you think?? I kind of love it! The concept of it reminds me a bit of the original Delirium cover, which can never be a bad thing. I think it represents the tone of the book quite well, and it's just interesting to look at. I bet it will be even better in person.

Here's the synopsis for the book:

It starts with an itch you just can't shake. Then comes a fever and a tickle in your throat. A few days later, you'll be blabbing your secrets and chatting with strangers like they’re old friends. Three more, and the paranoid hallucinations kick in.

And then you're dead.

When a deadly virus begins to sweep through sixteen-year-old Kaelyn’s community, the government quarantines her island—no one can leave, and no one can come back.

Those still healthy must fight for dwindling supplies, or lose all chance of survival. As everything familiar comes crashing down, Kaelyn joins forces with a former rival and discovers a new love in the midst of heartbreak. When the virus starts to rob her of friends and family, she clings to the belief that there must be a way to save the people she holds dearest.

Because how will she go on if there isn't?

Megan Crewe crafts a powerful and gripping exploration of self-preservation, first love, and hope. Poignant and dizzying, this heart-wrenching story of one girl’s bravery and unbeatable spirit will leave readers fervently awaiting the next book in this standout new series.