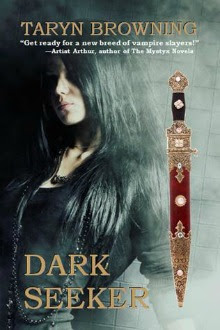 Synopsis: (from Goodreads)
For 17-year-old Seeker, Janie Grey, ridding the Baltimore streets of the undead is an inherited duty passed down from her Cherokee ancestors. Seeker Training Lesson #1: Never trust the undead. After her father’s tragic death, Janie creates her own life lesson: Love isn’t worth the risk. Both lessons are easy to follow until she encounters the flawed Kai Sterdam. At first, she believes he is the hybrid she is trained to hunt. But, when he has human traits, she determines she doesn’t know what he is. As Janie’s intrigue over who Kai is pushes her deeper into his mysterious past, she discovers a shocking truth that is even more harrowing than the evil they are up against. It’s a secret Kai wants to keep hidden, especially from Janie.

My Thoughts:
‘Dark Seeker’ was a pretty cool urban fantasy/paranormal book. It involves vampires, but it’s far more Buffy than Twilight, which I liked to see. Janie is a Seeker, which means she hunts vampires and vampire-hybrids called Daychildren. I enjoyed the Seeker mythology that was present in the book, but I wish we could have gotten to know more about the whole order/institution. For example, Janie seems to live through her high school years over and over until she stops being a Seeker, but there wasn’t much explanation about why or how. I would’ve liked to know more about what being a Seeker entailed, besides being tasked with killing vampires like a Slayer is.

I enjoyed the characters in ‘Dark Seeker’. Janie is a tough as nails heroine, and Kai was an interesting love interest. I preferred their banter-y relationship prior to their romantic connection, though. I thought their relationship started off at a good pace, but then it went straight to love, which was a bit disappointing. And then there was a massive reveal, and I thought that whole situation got wrapped up in a bow way too easily. Still, I did like how Kai and Janie fought for their relationship and tried to do what was best for the other person, even when it was a bit melodramatic.

Overall a pretty decent book, and I especially enjoyed the action sequences where Janie turned from conflicted teen to warrior powerhouse. The book seems to be getting a lot of 4 and 5 star reviews, so maybe if you’re more into vampires and urban fantasy you’ll like it even more than I did.

The Cover:
Pretty cool: I think it's perfect for the book and the genre.