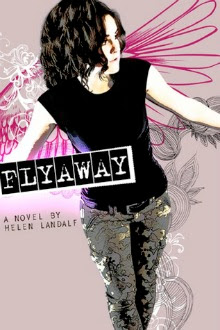 Synopsis: (from Goodreads)
Fifteen-year-old Stevie Calhoun is used to taking care of herself. But one night, her mom, who works as an exotic dancer in a downtown Seattle nightclub, never comes home.

It’s the night that kicks off an extraordinary summer: the summer Stevie has to stay with her annoyingly perfect Aunt Mindy; the summer she learns to care for injured and abandoned birds; the summer she gets to know Alan, the meanest guy in high school.

But most of all, it’s the summer she finds out the truth about Mom.

FLYAWAY is the story of a teen girl’s struggle to hold on to what she’s always believed, even as her world spins out of control.

My Thoughts:
I think the thing that stands out the most for me about this book is how I felt for the main character, Stevie. I think she was a very realistic character and she acted just like I would expect a scared, young teenager to act. She loved her mom and wanted to protect her, even though her mom wasn’t being a good parent or taking care of herself, let alone her daughter. Because of how Stevie acts I think you’ll either love her or hate her, but I personally found her behaviour completely realistic, even when she was being a bit of a brat. I liked the journey that Stevie took in her way of thinking and how she was going to live her life. The journey was incredibly tough, but I think Stevie became very strong because of it.

Now how about Aunt Mindy?? She was the sweetest! I’m glad there was someone in Stevie’s life taking care of her, and it was really touching how she was always there for her and how she kept trying even when Stevie was difficult and pushed her away.

Where the book lacked, I think, was the romantic angle. One guy just ended up being someone completely different from who we were introduced to. His character did a total 180; it was so strange. The other guy had a ton of issues, with a very shady past with acting out. I could actually see the start of chemistry between him and Stevie, but I didn’t really think it was necessary or very well developed. Really this is more of a book about Stevie and her Mom, so I didn’t think it needed the romance.

The book has a “caged bird becoming free” metaphor, and while I think it was a bit overdone, it was still sweet. I enjoyed reading this one overall, probably because the writing style was very flowing and easy to get through. In the end, though, I don’t think it’s the most compelling book on the topic. I expected it to be more powerful with showing the effects of drugs on a person, but it didn’t really go as deep as it could have. This is one of those "take it or leave it" books, where I don't really have strong feelings either way whether it's worth a read or not.

The Cover:
I really like how creative it is; it totally stands out from most other covers.