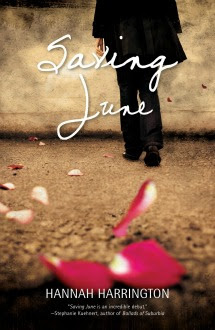 Synopsis: (from Goodreads)
‘If she’d waited less than two weeks, she’d be June who died in June. But I guess my sister didn’t consider that.’

Harper Scott’s older sister has always been the perfect one so when June takes her own life a week before her high school graduation, sixteen-year-old Harper is devastated. Everyone’s sorry, but no one can explain why.

When her divorcing parents decide to split her sister’s ashes into his-and-her urns, Harper takes matters into her own hands. She’ll steal the ashes and drive cross-country with her best friend, Laney, to the one place June always dreamed of going California.

Enter Jake Tolan. He’s a boy with a bad attitude, a classic-rock obsession and nothing in common with Harper’s sister. But Jake had a connection with June, and when he insists on joining them, Harper’s just desperate enough to let him. With his alternately charming and infuriating demeanour and his belief that music can see you through anything, he might be exactly what she needs.

Except June wasn’t the only one hiding something. Jake’s keeping a secret that has the power to turn Harper’s life upside down again.

My Thoughts:
So, this is one of those dead sister books. And in a lot of ways it was typical in that regard, but thankfully once the book got going it gained some originality. Harper decides to take her sister’s ashes to California, where June always wanted to go. So road trip! Yes, this is a road trip book, and like every good road trip it also contains a lot of music and music references. If you’re a music person you will definitely enjoy this aspect. Me? I did enjoy it, and I think it allowed for some lightness and humour to creep into the novel.

So Harper is our main character, and unfortunately I didn’t really connect with her. I felt bad for her, but she had such a bad attitude. Some of her behaviours really turned me off, and I just found her really dark and cynical. And, to be 100% honest, I was really uncomfortable with her proclamations about the lack of God’s existence and her attitude toward faith in God. I just found it really heavy handed. Everyone always talks about the way faith is portrayed in books, and whether or not it’s going to offend someone who’s not a believer, but what about the opposite? Anyway, just something to think about.

Jake as a character was a bit hard to figure out. I wish we could have gotten to know him better throughout the book rather than just at the end. I know a lot of people were swooning over him, but I found him a bit moody and secretive for my liking. Harper and Jake together? I don't know. In a lot of ways I think it worked, but then there was a twist toward the end of the book that sort of ruined things for me. I found it really ridiculous, and I thought it could have been dealt with in a much better way.

I think this is really a book about Harper choosing life where her sister didn’t, and trying to get over her sister’s death, or at least trying to understand it and deal with it. Unfortunately I didn’t connect with ‘Saving June’ in the way many others did. I felt something while I was reading it, but ultimately it didn’t resonate with me in the long term.

The Cover:
Pretty enough, though I think I like the Australian cover better.