From What I Remember by Stacy Kramer & Valerie Thomas 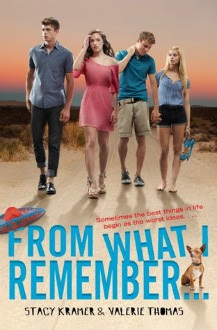 Synopsis: (from Goodreads)
KYLIE: Tijuana WHAT? I should be putting the finishing touches on my valedictorian speech. Graduation is TODAY, and is this a wedding band on my finger.

MAX: It all started with Kylie's laptop and a truck full of stolen electronics Okay, it was kind of hot, the way she broke us out like some chick in an action movie. But now we're stranded in TIjuana. WIth less than twenty-four hours before graduation. Awesome.

WILL: Saving Kylie Flores from herself is kind of a full-time occupation. Luckily, I, Will Bixby, was born for the job. And when I found out she was stuck in Mexico with dreamy Max Langston, sure, I agreed to bring thier passports across the border--but there's no reason to rush back home right away. This party is just getting started.

LILY: I just walked in on my boyfriend, Max Langston, canoodling with Kylie Flores, freak of the century. Still, I can't completely hold it against him. He NEEDS me. It's even clearer now. And I'm not giving him up without a fight.

My Thoughts:
This is a novel about letting loose, discovering yourself, and making the most of life, and it was so much fun to read. I have to say that I’m a sucker for the hate/disdain turned into love trope, and I loved it here because the authors did such a good job with it. There was a really slow progression between the two main characters, realizing that the other is different from what they initially seem, and then that feeling of attraction between them - not just for looks, but for personality as well. There was some really giddy moments between Max and Kylie, and I really adored them together.

I’m not normally a fan of books that have so many different POVs but it really worked in this situation because it was mainly just the two main characters, occasionally going off to the secondary characters. It gave you perfect glimpses into the other characters and locations without going off the main plot too much.

This book is full of crazy, silly teens behaving “badly”, so if you have a problem with teens drinking then it’s definitely not the book for you. However if you don’t mind that reality then I think you’ll really enjoy it. It was fun and funny and sweet, with some serious emotions and conversations mixed in with all the craziness.

I really identified with the main character Kylie and her studious nature: how she rarely let herself go to have fun. I also adored Max because he was smart and sweet and good, but still acted like an idiot teenage boy (aka he wasn’t too perfect, which was a nice change from a lot of YA books, actually).

Overall this is just a very fun contemporary YA novel that will make you laugh and smile and fall in love with the characters; I definitely really enjoyed it.

The Cover:
I like it - I think it fits well.

Find From What I Remember by Stacy Kramer & Valerie Thomas on Goodreads, Book Depository, & Amazon.