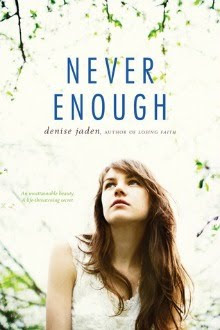 Synopsis: (from Goodreads)
From the author of Losing Faith, a novel about two sisters and the eating disorder that threatens to destroy their family.

Loann’s always wanted to be popular and pretty like her sister, Claire. So when Claire’s ex-boyfriend starts flirting with her, Loann is willing to do whatever it takes to feel special… even if that means betraying her sister.

But as Loann slips inside Claire’s world, she discovers that everything is not as it seems. Claire’s quest for perfection is all-consuming, and comes at a dangerous price. As Claire increasingly withdraws from friends and family, Loann struggles to understand her and make amends. Can she heal their relationship —and her sister—before it’s too late?

My Thoughts:
When I finished this book I basically just wanted to scoop up Loann and Marcus and hug them and put them in a protective bubble so that nothing could ever hurt them again. Because, really, people should not have to go through what they went through. And sadly... of course people actually go through scenarios like that. That’s probably the worst part. But do not despair, because despite the sad situations in this book it’s not entirely a downer. The connection that Loann and Marcus forms is the beautiful centre of this book, and they are absolutely precious together, whether it be as friends or as something more. These two are a team, and the bond that forms between them is amazing to read about.

I think where Denise Jaden gets things really right is that there isn’t any proselytizing in this book. It would be easy when dealing with such difficult subjects to drop in a heavy handed message, but there really isn’t one here. There is a deep sense of “yes, you ARE enough!” to counteract the book’s title, but it’s more of a thought for readers to pull out themselves as they see the amazingness and beauty in Loann, Marcus, and Loann’s sister Claire: we find the worthiness that these characters don’t see in themselves.

‘Never Enough’ was definitely a tough read, especially when it came to Claire’s story. Eating disorders are a very sensitive subject, but I think Denise handled this storyline with the greatest sensitivity while still portraying it honestly. I had to let my thoughts process for a bit before writing this review, and I’m glad I did, because I think I appreciate the book even more now. It’s not easy to craft a book that will fill readers with such a wide range of emotions. Nor is it simple to make readers think and philosophize on such important issues as body image, self worth, self esteem, and even the concept of soul mates and ‘meant to be’. Denise Jaden has succeeded on all these fronts, and for that I applaud her.

The Cover:
It's definitely pretty and captured the emotion well; it's always better when the girl actually looks like the character, though.

ETA: This was originally a 5 star rating, but I've put it down to 4.5 stars. See, I originally had it at 4, then moved it to 5, and then changed my mind AGAIN. It doesn't quite warrant 5 stars, but the very powerful emotions put it pretty darn close.

You should also definitely check out this video that Denise put together of her author friends talking about not feeling like enough when they were teens: