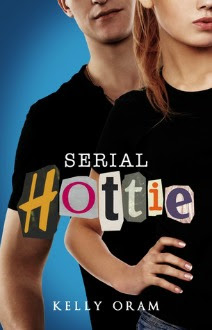 Hockey-obsessed tomboy Eleanor Westley has never been the object of a guy’s affection before. So when the hottest boy she’s ever seen moves in across the street and starts treating her like she’s the center of his universe, naturally she’s going to be a little skeptical. But everything starts to make sense when girls who look just like Ellie start dying all around the city. Obviously the new guy is the killer, and of course he only likes her because he wants to slice her into tiny pieces. Right?

The more Ellie gets to know Seth the more she’s convinced he’s a psychopathic killer. The problem is he’s the sweetest psychopathic killer she’s ever met. Not to mention he’s brutally hot. No matter how hard she tries, she can’t help but fall for him. Will Ellie find true love, or will her summer of firsts turn out to be a summer of lasts?

My Thoughts:
I feel like this book had so much potential, and based off the reviews it worked for a lot of people, but unfortunately it didn’t work for me. I loved the actual concept for the book. It’s absolutely absurd, but absolutely awesome. I definitely haven’t read another book like it. I liked the humour and I also appreciate how straightforward Kelly Oram’s writing seems, while being deceptively complex. She set up a really great story that had twists and turns in it, and makes the reader question what they think and what they know. The mystery aspect was actually done quite well, and even when I thought I figured it out I was still questioning my judgement.

What didn’t work so well for me were the stereotypical main characters. Our main character Ellie is a hockey playing tomboy with a filthy mouth and anger management issues. She chooses to punch any and everyone who even annoys her a little bit, and she doesn’t see anything wrong with this behaviour. I get really annoyed in popular culture when it’s dubbed okay for girls to get away with slapping or hitting a guy. Why is this okay? If it were a guy doing it to a girl we would be offended and call it abuse, but for some reason it’s okay in TV, movies, and books for girls to get away with this. Ellie’s sister, Angela, was another stereotype, her being the popular, beautiful older sister who everyone swoons around.

My biggest problem with this book, though, is Ellie’s love interest Seth. I’m not sure what to think about Seth. He’s emotionally unstable, manipulative, and violent, and yet Ellie finds herself “in love” with him, despite being scared of him numerous times and thinking he’s a serial killer. The thing is, I don’t know if Seth is supposed to be a parody or comment on all the abusive love interests in YA, especially paranormal YA. I could almost see how he could be, yet the book itself doesn’t read like a parody. And without the potential parody aspect I really can’t stand how we, as readers, are supposed to swoon for Seth and cheer for him and Ellie to be together, when he tells her what to do, tells her what he’s going to let her do, and physically restrains her (numerous times) when she tries to get away from him.

I hate to be so critical about a book that has a lot of promise, and is, for the most part, smartly written, but I can’t keep quiet about my disdain for this type of love interest in YA fiction. I don’t care that it’s “just fiction”, but I think it sets a dangerous precedent when supposedly “charming” guys are threatening to kill for the girl they “love” and are abusing them emotionally and physically. This type of character and relationship really ruined what could have been a great read.

The Cover:
I really like it. The concept is simple, but the 'ransom letter' font for the title is awesome.