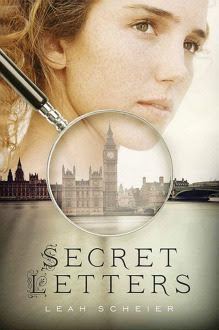 Synopsis: (from Goodreads)
Inquisitive and observant, Dora dreams of escaping her aristocratic country life to solve mysteries alongside Sherlock Holmes. So when she learns that the legendary detective might be her biological father, Dora jumps on the opportunity to travel to London and enlist his help in solving the mystery of her cousin's ransomed love letters. But Dora arrives in London to devastating news: Sherlock Holmes is dead. Her dreams dashed, Dora is left to rely on her wits--and the assistance of an attractive yet enigmatic young detective--to save her cousin's reputation and help rescue a kidnapped heiress along the way.

Steeped in Victorian atmosphere and intrigue, this gripping novel heralds the arrival of a fresh new voice in young adult literature.

My Thoughts:
I can't help but compare this to the Mary Quinn/The Agency books by Y.S. Lee which are so clever with an amazing main character. In comparison to those, ‘Secret Letters’ fell flat. As in: it really bored me, and I basically had to force myself to continue reading it. I'm probably making it sound a lot worse than it actually is, but it didn't help that Dora, the heroine, came off like a know it all. And then besides all of her supposed skills of deduction she didn’t have much of a personality to speak of.

As for the mystery itself, parts of it were quite obvious, and getting to the big reveal at the end of the book didn’t really feel satisfying at all. I think I just felt disconnected from the characters and the plot in general because of the writing style. It was almost clinical, taking a step by step process of explaining “this happened, and then this happened”. I believe I also failed to become engaged because the Sherlock Holmes element of the story was such a draw for reading this book, and yet I felt like it didn’t really do much for the story. Dora’s father really could have been any detective and the story would have been the same.

I’ve seen some very positive reviews of this book, so perhaps it will appeal to you. Unfortunately ‘Secret Letters’ failed to engage me in any real way.