You might think I'd be sick of "Best Of" lists after last week, but you'd be wrong! ;)

Last year I took part in Jamie's end of the year book survey, and this year I'm happy to be doing so again. 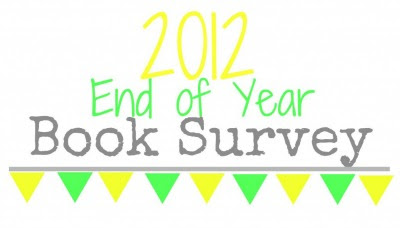 (Graphic is Jamie's; image links back to her post)
Best in Books
1. Best Book You Read In 2012? (You can break it down by genre if you want)
The Sea of Tranquility by Katja Millay, hands down.

2. Book You Were Excited About & Thought You Were Going To Love More But Didn’t?
A Need So Beautiful because it seems like everyone loves it, but I just wasn’t impressed. Secret Letters because the concept sounded epic, but I found the delivery to just be so-so.

3. Most surprising (in a good way!) book of 2012?
Onyx! While I liked Obsidian, I didn’t see what the big deal was. Avery convinced me that Onyx was epic and way better than Obsidian, and she was right. First I re-read Obsidian and I liked it more the second time around, and when I read Onyx I totally loved it.

4. Book you recommended to people most in 2012?
Well, I always recommend Jellicoe Road and pimp it out to everyone. Besides that, probably Come See About Me or The Sea of Tranquility.

5. Best series you discovered in 2012?
Well, I didn’t discover it this year, but I finally started reading Women of the Otherworld by Kelley Armstrong.

As for an actual discovery, I read the Experiment in Terror series just based on a tweet from Kristilyn about how it was a sexy series about a duo on a ghost hunting show.

7. Best book that was out of your comfort zone or was a new genre for you?
That’s a tough one, because within YA I read pretty much all genres, and outside of YA I tend to stick to romance/paranormal romance type books. I guess if I had to say it would Sign Language by Amy Ackley, because it features a younger YA character, and it’s a sad cancer book, which isn’t usually my thing. I can’t say it was a favourite of the year, but it was very powerful and beautifully written.

8. Most thrilling, unputdownable book in 2012?
Well, a lot of them were unputdownable, but add in the thrilling and it’s gotta by Scarlet (Marissa Meyer), The Darkest Minds, and Throne of Glass.

9. Book You Read In 2012 That You Are Most Likely To Re-Read Next Year:
My Life Next Door, The Sea of Tranquility, Come See About Me ... & many, many more. I love re-reading!

10. Favorite cover of a book you read in 2012?
There are so many choices, but I love Unspoken’s cover, because it fits the book perfectly and it’s not a typical YA cover. 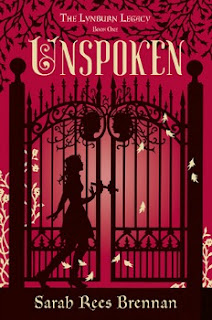 11. Most memorable character in 2012?
Wolf from Scarlet, Gansey from The Raven Boys, & both Elisa & Hector in The Crown of Embers.

12. Most beautifully written book read in 2012?
The Sea of Tranquility.

13. Book that had the greatest impact on you in 2012?
Oh wow, tough call! Probably Second Chance Summer, The Sea of Tranquility, and Just One Day.

14. Book you can’t believe you waited UNTIL 2012 to finally read?
Probably Bitten and the other Women of the Otherworld books. I’m still making my way through them, and they’ve been on my TBR for quite a while. In a way it’s good, though, since I don’t have to wait for any of them to be released.

15. Favorite Passage/Quote From A Book You Read In 2012?
I’m actually not a big quote person. I should keep track of my favourite passages in a better way! Two stick out to me, though, because I favourited them on Goodreads.

Both from my fave of the year, The Sea of Tranquility.

"I wished my mother was here tonight, which is stupid, because it's an impossible wish." He shrugs and turns to me, drowning the smile that cracks me every time.

"It's not stupid to want to see her again."

"It wasn't so much that I wanted to see her again," he says, looking at me with the depth of more than seventeen years in his eyes. "I wanted her to see you."

16.Shortest & Longest Book You Read In 2012?
Shortest: A read quite a few novellas, but for shortest full length novel Goodreads tells me it was What A Boy Wants at 119 pages (though it didn't seem that short??).

Longest: The Crimson Crown at 598 pages (and this one doesn't seem so long... it's deliciously long, where you can speed through it and you don't want the book to end).

17. Book That Had A Scene In It That Had You Reeling And Dying To Talk To Somebody About It? (a WTF moment, an epic revelation, a steamy kiss, etc. etc.) Be careful of spoilers!
Well this is just cruel because the two that stick out to me are the endings of The Madness Underneath & Just One Day ... and both are 2013 releases. I need to talk about them!!!!!

18. Favorite Relationship From A Book You Read In 2012 (be it romantic, friendship, etc).
This is tough! I could probably list a zillion, but I’ll stick to just 1 for each category. Romance wise it’s tough to beat Zach & Aura from the Shade books, specifically Shine which concluded the trilogy this year. Friendship-wise, the Raven boys & Blue really stick out to me.

19. Favorite Book You Read in 2012 From An Author You Read Previously
Okay, well this could be a REALLY long list. Ummm, I will try and cut it down to a few. The Crimson Crown was a fantastic ending to the Seven Realms series. Second Chance Summer was an amazing follow-up to Amy & Roger’s Epic Detour, which is one of my favourites. I am a big Melissa Walker fan, and Unbreak My Heart was -- no surprise -- so lovely.

20. Best Book You Read That You Read Based SOLELY On A Recommendation From Somebody Else:
Well, I think The Sea of Tranquility fits into this category. Ann Aguirre tweeted that it was her favourite contemporary of the year, or one of her favourite contemporaries ever, or something along those lines. I am a huge contemp fan, so I immediately looked it up. I saw 5 star review after 5 star review on Amazon and Goodreads, and I decided I had to read it ASAP. Thank goodness I did!! While the reviews confirmed to me that I had to read this one, it was really the tweet that caught my attention and made me aware of the book.


Looking Ahead
1. One Book You Didn’t Get To In 2012 But Will Be Your Number 1 Priority in 2013?
As of right now, The Host. I have owned this book since the month it was released, yet I haven’t read it yet. Must read before the movie!!

2. Book You Are Most Anticipating For 2013?
Oh jeeze. Well, I have been incredibly lucky to receive ARCs of Things I Can’t Forget, Scarlet, Breaking Point, Just One Day, and The Madness Underneath -- otherwise those would be at the top of my list. Otherwise it has to be Requiem, Clockwork Princess, The Indigo Spell, and Divergent #3. [ok getting too lazy to link those, sorry!]

3. One Thing You Hope To Accomplish Or Do In Your Reading/Blogging In 2013?
I’d like to write up more discussion posts, because they seem to get some good comments/interaction. I’d also like to work on redesigning the blog, because I’ve been talking about it for months now and just haven’t got around to it.