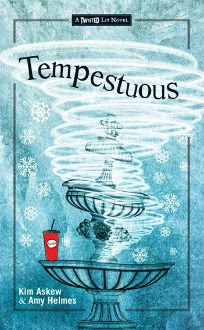 Synopsis: (from Goodreads)
Recently banished, unfairly, by the school’s popular crowd, former “it girl,” Miranda Prospero, finds herself in a brave new world: holding dominion amongst a rag-tag crew of geeks and misfits where she works at the Hot-Dog Kabob in the food court of her local mall. When the worst winter storm of the season causes mall workers and last-minute shoppers to be snowed-in for the night, Miranda seizes the opportunity to get revenge against the catty clique behind her social exile. With help from her delightfully dweeby coworker, Ariel, and a sullen loner named Caleb who works at the mall’s nearby gaming and magic shop, Miranda uses charm and trickery to set things to right during this spirited take on Shakespeare’s The Tempest.

My Thoughts:
There’s something about a story where teens are trapped in one location that always intrigues me. Mix that with being trapped in a mall (who hasn’t dreamed about that before?), and the fact that this is a “twisted lit” novel based on Shakespeare’s ‘The Tempest’, and you definitely have a winner on your hands.

What I really liked about ‘Tempestuous’ is that it’s just plain fun. Miranda is an over the top character, but in a good way. She’s someone who is just realizing how her actions have affected others in the past, and while she’s still a bit judgey in the beginning, she really starts to come into her own throughout the novel.

I felt like it was easy to figure out who was responsible for the store robberies, and yet it was still fun figuring out when the teens would discover the true culprit. Despite deducing the overall plot (because of being a bit familiar with ‘The Tempest’), I was still wondering what exactly would happen next and how the play would be referenced and connected.

‘Tempestuous’ features some really fun side characters that stuck out as individuals, especially Ariel, who is all kinds of adorable. The relationship between Caleb and Miranda throughout the evening seemed natural. There was cute banter and, eventually, begrudging respect from both of them. I loved the plot device where they were literally tethered together, so you had both of them present at all times.

This book is a big mall adventure that you could almost see as cinematic, with all the hijinks going on and the visual way they are described. Pretty much if you’re looking for a really fun reading experience, then look no further.

The Cover:
I really like almost as a piece of artwork (you know, minus the soda cup), but as a book cover I'm not sure if it sticks out that well.