The Friday Society by Adrienne Kress 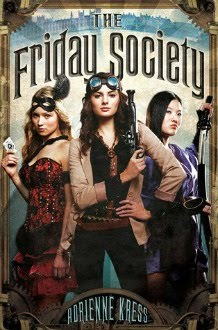 Synopsis: (from Goodreads)
An action-packed tale of gowns, guys, guns –and the heroines who use them all.

Set in turn of the century London, The Friday Society follows the stories of three very intelligent and talented young women, all of whom are assistants to powerful men: Cora, lab assistant; Michiko, Japanese fight assistant; and Nellie, magician's assistant. The three young women's lives become inexorably intertwined after a chance meeting at a ball that ends with the discovery of a murdered mystery man.

It's up to these three, in their own charming but bold way, to solve the murder–and the crimes they believe may be connected to it–without calling too much attention to themselves.

Set in the past but with a modern irreverent flare, this Steampunk whodunit introduces three unforgettable and very ladylike–well, relatively ladylike–heroines poised for more dangerous adventures.

My Thoughts:
‘The Friday Society’ is a real treat for those who enjoy books featuring strong female characters and friendship. I loved how each of the three girls (Cora, Nellie, & Michiko) had distinct personalities and specific goals, but that each of them wanted to be something more. They yearned to show their own strength and capability to a society (London, 1900) which largely ignored them. There was great chemistry between the girls, and how their stories intersected was interesting.

This book is a historical mystery with a dash of steampunk to it. It’s “steampunky” without being over the top. There are inventions and science and other aspects, but nothing too technical that would scare off readers new to the genre. ‘The Friday Society’ also features a quite humourous tone. Despite the fact that the book deals with murder and danger there was always a lightness to it. The chapter headings were amusing, and the style of narration helped establish this.

I’m a big fan of romance, yet I’m glad to say that ‘The Friday Society’ works well without romance as a main plot line. There’s a teensy bit of romantic potential, but it’s more just the inclusion of a couple of cute guys. I’m particularly a fan of a certain rookie cop who was quite adorable in his shy admiration of Nellie. I’m glad that an “epic romance” wasn't included in this book, because it allowed the book to focus on its heart: female friendship and solving the mystery.

My one tiny annoyance with this book was how modern the language was at times, with the girls using phrases or words that didn’t fit the time period at all. I'm not sure if this will be cleaned up in the finished copy, or if it was supposed to be part of the narrative voice, but it was really jarring in a couple of places. This definitely didn't stop me from enjoying the book, though, and I found ‘The Friday Society’ to be a very enjoyable read on the whole. I especially appreciated how the mystery was solved at the end. It's great to see a book that works completely as a standalone and yet has series potential as well.

The Cover:
So much fun!