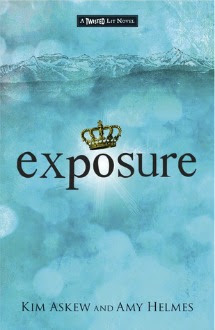 Synopsis: (from Goodreads)
Double, double, toil and trouble. Sometimes, the quest for high school royalty can be deadly! In this emotionally-charged twist on Shakespeare’s Macbeth, a self-conscious shutterbug named Skye Kingston navigates a treacherous school year in Alaska fraught with unspoken secrets and tragic twists of fate. Along the way she encounters three strangely prophetic BFFs; one social-climbing, sociopathic cheerleader; and a heart-stopping hottie named Craig McKenzie: the man who would be Prom King. Can Skye save the boy she loves — and herself — before they get caught in the crosshairs?

My Thoughts:
Exposure is another Twisted Lit book, this time based on Macbeth, which is absolutely one of my favourites. I enjoyed how the book had the same dark somber quality of the play, and I loved examining the similarities between the book and the play. I kept wondering how the “prophecies” would come to life in modern day Alaska. This setting was just amazing -- it made the book atmospheric, and it was so cold and sparse at times that it matched the mood so well.

I liked the main character, Skye, a lot for the most part. She’s a shy shutterbug hiding behind her camera, and the book is a real journey of her opening up. I was frustrated by her at times, though, because I wanted her to do the “right thing” instead of just protecting her long-time friend and crush. Craig is an interesting character: we see his appeal from Skye’s POV and he has his great moments, but as the reader we also see his weaknesses and wonder why he doesn’t own up to the situation (besides the fact that it’s mirroring the play, of course).

Overall I didn’t connect with this one quite as much as I would have liked, but I still definitely enjoyed the retelling of Macbeth and seeing it brought into a modern setting. I really commend the authors for what they’re doing with this series, and I would definitely read future installments.

The Cover:
Again, I really like the image, but I'm not sure it works that well as a book cover.