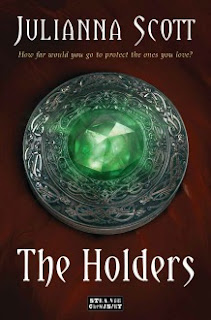 Synopsis: (from Goodreads)
17-year-old Becca spent her whole life protecting her brother from, well, everything. The abandonment of their father, the so called 'experts' who insist that voices in his head are unnatural and must be dealt with, and the constant threat of being taken away to some hospital and studied like an animal. When two representatives appear claiming to have the answers to Ryland's perceived problem, Becca doesn't buy it for one second. That is until they seem to know things about Ryland and about Becca and Ryland's family, that forces Becca to concede that there may be more to these people than meets the eye. Though still highly skeptical, Becca agrees to do what's best for Ryland.

What they find at St. Brigid's is a world beyond their imagination. Little by little they piece together the information of their family's heritage, their estranged Father, and the legend of the Holder race that decrees Ryland is the one they've been waiting for. However, they are all--especially Becca--in for a surprise that will change what they thought they knew about themselves and their kind.

She meets Alex, a Holder who is fiercely loyal to their race, and for some reason, Becca and Ryland. There's an attraction between Becca and Alex that can't be denied, but her true nature seems destined to keep them apart. However, certain destinies may not be as clear cut as everyone has always believed them to be.

Becca is lost, but found at the same time. Can she bring herself to leave Ryland now that he's settled and can clearly see his future? Will she be able to put the the feelings she has for Alex aside and head back to the US? And can Becca and Ryland ever forgive their father for what he's done?

My Thoughts:
I really enjoyed ‘The Holders’. The plot kept me interested, and I loved Becca’s narrative voice. It was a book where you aren't wholly surprised by anything that happens, and yet the whole book is still so entertaining. What’s most interesting, to me at least, is that ‘The Holders’ had an insta-love element to it, which I would normally despise, and in this case I couldn’t get enough of Becca and Alex. Without giving too much away, their relationship is based on a bonding element to do with Holder powers. Normally this would have me all up in arms about free will/choice, but somehow I loved their romance and the way it was presented. Maybe this is because Alex is such a sweet love interest: he’s a very caring guy who is so kind to Becca. There’s an instant camaraderie between the two characters, and that easy rapport made me love their relationship. Even beyond anything romantic you could tell that the characters were such good friends.

‘The Holders’ features a very cool X-Men like element where the Holders have power, but they also have a powerful enemy who believes humans to be inferior. This enemy wants to ‘collect’ Holder powers and take them for himself. But despite what some reviewers on Goodreads have stated this didn't feel like a rip-off at all. There are so many books, TV shows, and movies about a school for ‘gifted’ students, and while there was definitely an X-Men vibe to this book, it was just that: a vibe, and not at all a direct copy. While the themes and some of the plot fit in well with other stories of the genre, there is such a uniqueness to the characters and their story.

What else can I say about this book? I just wholeheartedly enjoyed it. The characters, including the side characters, were great, and I loved reading about their abilities. The Holder mythology was incredibly interesting, and I can’t wait to see how it plays out in the next book. Every element of 'The Holders' kept me reading until the very end; it was one of those books that you just can’t set down.

The Cover:
I like that it's relevant to the book, and I think it's pretty memorable.

GIVEAWAY
See the details for the tour-wide giveaway below and enter the Rafflecopter to win.


You can find the full blog tour schedule HERE.