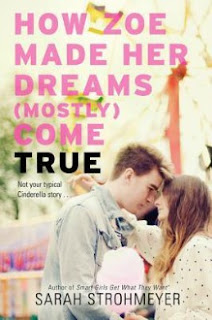 How Zoe Made Her Dreams (Mostly) Come True
by Sarah Strohmeyer

Synopsis (from Goodreads):
From Sarah Strohmeyer, author of Smart Girls Get What They Want, comes this romantic comedy about one girl's summer job from hell. Think The Devil Wears Prada set in Disney World.

When cousins Zoe and Jess land summer internships at the Fairyland Kingdom theme park, they are sure they've hit the jackpot. With perks like hot Abercrombie-like Prince Charmings and a chance to win the coveted $25,000 Dream & Do grant, what more could a girl want?

Once Zoe arrives, however, she's assigned to serve "The Queen"-Fairyland's boss from hell. From spoon-feeding her evil lapdog caviar, to fetching midnight sleeping tonics, Zoe fears she might not have what it takes to survive the summer, much less win the money.

Soon backstabbing interns, a runaway Cinderella, and cutthroat competition make Zoe's job more like a nightmare than a fairy tale. What will happen when Zoe is forced to choose between serving The Queen and saving the prince of her dreams?

Smart Girls... was a really great contemp read, so I'm looking forward to reading this next release from Sarah Strohmeyer. I love the idea of a theme park setting, especially one that sounds like the anti-Disney World.