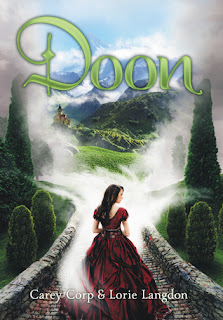 
Synopsis (from Goodreads):
Veronica doesn't think she's going crazy. But why can't anyone else see the mysterious blond boy who keeps popping up wherever she goes? When her best friend, Mackenna, invites her to spend the summer in Scotland, Veronica jumps at the opportunity to leave her complicated life behind for a few months.

DOON is loosely based on the premise of the musical Brigadoon, with permission from the Alan Jay Lerner Estate and the Frederick Loewe Foundation.

So, I haven't actually seen Brigadoon, but it sounds right up my alley. And this loose adaptation of it? Also sounds awesome! Scotland, other worlds, enchantments, and hot princes? Yes please!