All Over You by Beverley Kendall

Note: This book was previously published under the title "Those Nights in Montreal" 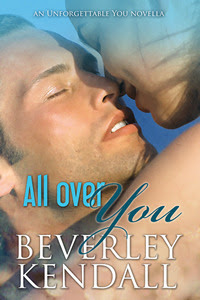 All Over You by Beverley Kendall
Release Date: May 6, 2013
Publisher: Season Publishing LLC
Pages: 138
Series: Unforgettable You #1.5
Review Source: Netgalley


Synopsis: (from Goodreads)
An ex is an ex for a reason

To Rebecca Winters, it’s not just a saying or the title to a catchy tune, it’s a rule she staunchly lives by. Especially since the break up with her ex. What’s the point in trying to fix the “unfixable”? Besides, only a girl hell-bent on more heartbreak would go back to the guy who bailed on her when she needed him most. But saying no to Scott is becoming more difficult than surviving the breakup itself. And unfortunately for her, the kind of pressure he's exerting is making her rule all too easy to break.

Scott Carver has given up trying to get over his ex. He’s still in love with her and their year apart has done nothing to change that. Yeah, he knows he screwed up. Just how royally, he wasn't aware of until now. So when Becca agrees to give him a second chance, he grabs on to it with both hands. But it’s clear the only way things will ever truly be right between them is if he comes clean…about everything. He can only pray the truth doesn’t send her running—for good this time.

My Thoughts:
This was a longer novella where I liked the writing style and the story itself. The idea of getting back with an ex after a complicated breakup and time apart was interesting, especially after being introduced to the characters in the first book of this series (Only For You aka When in Paris).

While there were a lot of great things about this novella, what I didn't care for was all of Rebecca's manipulations. She's a sweet girl and she had been hurting from things in her past, but continually testing Scott and saying one thing but meaning another got a bit old. What I did love is that even when the characters were making decisions that drove me crazy, I still found myself enjoying the story and wanting to read on to the happy ending.

Overall this one is well worth reading, especially because of the currently free price tag. I liked the first book a lot, this novella was enjoyable, and I’m very much looking forward to reading book two in the series, which is April and Troy's story.

The Cover:
Better than the first book, though not particularly meaningful (a skiing cover would be great!).

Find All Over You by Beverley Kendall on Goodreads & Amazon (currently free!).