This is W.A.R. by Lisa & Laura Roecker 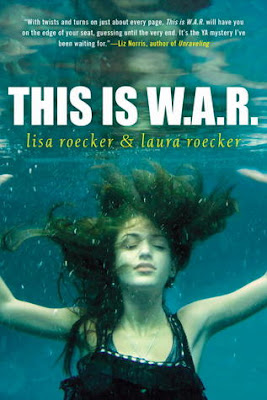 alone.
​
no one believes that willa's drowning was an accident. after all, she held the club record for the 1500 meter freestyle. and the gregory family has a history of making troublesome girls disappear.
​
they all know james gregory killed her.
​
but none of them will say a word.
​
enter the w.a.r.--the war to avenge Willa's death. four girls. four very different motives to avenge, and only one rule: destroy
the gregory family at any cost. innocence is lost, battles are won, and the pursuit of the truth ultimately threatens to destroy them all.

My Thoughts:
I was so intrigued by this concept and I had enjoyed the Liar Society books by these authors immensely. To me, though, ‘This is W.A.R.’ felt like it had been written by entirely different people. While Liar Society features an incredibly smart and resourceful heroine, the girls here were way out of their league and were grasping for straws.

The first thing this book requires of its reader is a huge suspension of disbelief. Unfortunately I just couldn’t do it. I couldn’t believe that every single person in a community (as insular as it was) would “know” that a boy killed a girl and just wouldn’t say anything about it because of how rich and important the family is. Of course there are people, rich and poor, that would lie for their own, but there are also tons of people with morals who would never corroborate a fake story. In order to enjoy this book you also have to believe that the local police department is so inept that they wouldn't find anything strange with the murder scene. You have to believe that in the drowning of a teenager they wouldn’t check the blood-alcohol levels or do a tox screen to see what caused her death. To me, this just didn’t make sense.

I also had a hard time with the motivations of the girls and what exactly they were trying to do. They want justice for their friend’s death, and instead of trying to gather evidence of what happened and actually get the killer prosecuted, they decide that taking away the inheritance of the culprit and his brother is the way to go. So apparently being poor is a good punishment for murder? They also apparently think that stupid teenage pranks will be enough to cause the grandfather of the boys to disinherit them. Ladies, if their grandfather is paying people off to cover up a murder, do you really think that pictures of a drug deal or having an antique watch go missing will make a difference?

This book is told from four perspectives, and each girl knows a little something different about the night their friend was killed. Unfortunately the voices here really blended together and I had a hard time keeping track of who was who. The stakes of this book were just so high, and the immature teenage pranks that would have been fun or witty in another book just came off as ridiculous here. I so wish I could say I liked this one, because the authors are awesome, but I just wasn’t feeling it at all.

Find This is W.A.R. by Lisa & Laura Roecker on Goodreads, Book Depository, & Amazon.