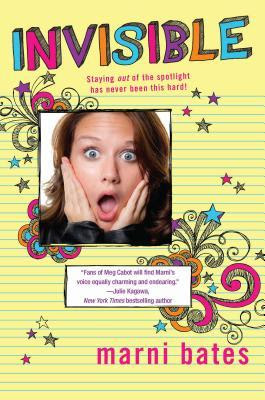 Invisible by Marni Bates
Release Date: June 25, 2013
Publisher: K-Teen
Pages: 300
Series: Awkward #2 (though it can be read as a standalone)
Review Source: Netgalley


Synopsis: (from Goodreads)
Jane Smith has survived three years of high school without making a single enemy, all by keeping a low profile. Not even her three best friends, Kenzie, Corey and Isobel, can say the same. But with Corey dating the lead singer from ReadySet and Kenzie in a relationship too, being invisible tends to be lonely. But now she's written an article for her school newspaper that has accidentally snagged the attention of some celebrities. Turns out, people get really upset when their innermost secrets are splashed all over the front page. And new her well-ordered life is being blasted to hell, with results that are wildly unexpected

My Thoughts:
I really enjoyed both of Marni’s other books, so I was excited to pick up this companion book to Awkward. Reading about Jane was interesting! Her inner voice was a lot more snarky than you would expect from someone who's been portrayed as studious and nothing else. She actually wasn’t always the most likeable character, and yet you couldn’t help but feel a bit bad with how invisible she feels. It was interesting to watch Jane’s journey, considering her being a pushover was a big part of the issues she was having.

I was also intrigued by the romance element of this book. While Jane's personal growth was the main theme, her relationship with Scott was also a large part of the book. I liked how Scott wasn't a swoony perfect type of guy; he's a bit gruff and perhaps still in the stage of teasing girls to show affection. Scott doesn't hold back from speaking his mind, but this can be a good thing when he sees the greatness in Jane and wants her to live up to her own potential.

‘Invisible’ was less fluffy and fun than Marni’s two previous K-Teen releases, but I still definitely enjoyed reading this book.