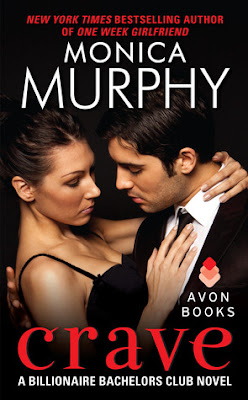 
Synopsis: (from Goodreads)
Billionaire Archer Bancroft always gets what he wants—and he’s wanted Ivy Emerson, his best friend’s sister, for far too long. Being forbidden and untouchable only makes her more tempting. When a million-dollar bet with his friends throws down a challenge—last bachelor standing takes all—Archer knows he can win. That is, until one enchanted evening with Ivy takes his heart for a ride.

Ivy knows Archer is nothing but bad news: Infuriating, arrogant…and completely intoxicating. But despite her best efforts, she can’t seem to keep away. When a stolen kiss leads to a night of heated passion, Ivy realizes she’s in trouble and in head over heels.

But in the light of day, everything seems clearer and Archer’s not so sure a one-night stand is all he wants. Concocting a plan to keep Ivy by his side, Archer might just be willing to lose this bet…and win the jackpot instead.

My Thoughts:
‘Crave’ is a book of an in between length, a bit too long to be considered a novella, but definitely not what I consider full novel length. What this means is there wasn’t a lot of time for plot or character development. I did start off really enjoying this read because the characters had off the charts chemistry and there was a history there, which them knowing each other since they were teenagers.

What quickly became clear to me, though, was that both characters annoyed me. Ivy was argumentative for the sake of being so, and she rejects Archer but then is pissed off when he defensively does the same. Archer, on the other hand, was the stereotypical broken womanizer character, but we really don't get to know him well or understand who he is. He could be forgiven for the way he acts, considering he has to deal with Ivy’s hot and cold attitude, but then he totally lost my respect by ordering Ivy around and being completely macho and controlling.

I think why this failed to engage me is because it featured lots of misunderstandings and not communicating, which is my least favourite kind of romantic conflict. This book had a promising plot line (I can’t resist "brother's best friend/best friend's little sister" romances), but the execution failed to impress me. It all felt very shallow to me, I think because the length of the story stopped there from being any real depth or background.