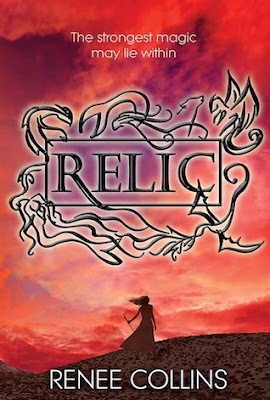 
Synopsis: (from Goodreads)
After a raging fire consumes her town and kills her parents, Maggie Davis is on her own to protect her younger sister and survive best she can in the Colorado town of Burning Mesa. In Maggie’s world, the bones of long-extinct magical creatures such as dragons and sirens are mined and traded for their residual magical elements, and harnessing these relics’ powers allows the user to wield fire, turn invisible, or heal even the worst of injuries.

Working in a local saloon, Maggie befriends the spirited showgirl Adelaide and falls for the roguish cowboy Landon. But when she proves to have a particular skill at harnessing the relics’ powers, Maggie is whisked away to the glamorous hacienda of Álvar Castilla, the wealthy young relic baron who runs Burning Mesa. Though his intentions aren’t always clear, Álvar trains Maggie in the world of relic magic. But when the mysterious fires reappear in their neighboring towns, Maggie must discover who is channeling relic magic for evil before it’s too late.

Relic is a thrilling adventure set in a wholly unique world, and a spell-binding story of love, trust, and the power of good.

My Thoughts:
‘Relic’ is a book that is magical, exciting, and unique. It completely stands on its own, not reminding me of anything I've read before. ‘Relic’ is a Western style fantasy, an alternate history that contains magical relics, which are the bones of long dead magical creatures. There’s the cowboys and saloons you would expect in a Western, but there’s also magic and magical predators.

The book is also a mystery, with Maggie trying to figure out who is burning towns and why. Maggie’s parents and her brother were killed in the razing of her village, so she has a personal stake in figuring out who the culprit is and making sure they pay. ‘Relic’ also has a romantic element, though it’s a light part of the story, and there’s some chemistry with other characters. Landon is the swoony cowboy character, while Álvar is a mysterious benefactor who has a dangerous sexiness to him. That being said, this book doesn’t contain a love triangle at all, which I appreciated.

Maggie is a great main character. She’s bright, brave, and totally competent. She wants justice and will work hard for it, but she’s also not afraid to ask for help and admit when she's in over her head. I loved reading her story, and I found ‘Relic’ to be a completely fascinating novel. It’s intense with action and magic, and the story line is incredibly interesting. I appreciated how there was a full conclusion to the mystery element with just enough larger plot dangling to make you want to read more in this world. I fully enjoyed this fantastical debut, and I can’t wait to read more from Renee Collins.

Be sure to check back tomorrow, because I am thrilled to be featuring an interview with Renee and a giveaway as part of the Authors are Rockstars tour.