Out of Play by Nyrae Dawn & Jolene Perry 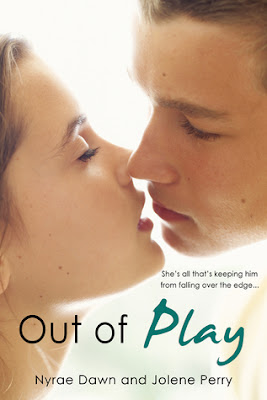 
Synopsis: (from Goodreads)
Rock star drummer Bishop Riley doesn't have a drug problem. Celebrities—especially ones suffering from anxiety—just need a little help taking the edge off sometimes. After downing a few too many pills, Bishop wakes up in the hospital facing an intervention. If he wants to stay in the band, he’ll have to detox while under house arrest in Seldon, Alaska.

Hockey player Penny Jones can't imagine a life outside of Seldon. Though she has tons of scholarship offers to all the best schools, the last thing she wants is to leave. Who'll take care of her absentminded gramps? Not her mother, who can’t even be bothered to come home from work, let alone deal with their new tenants next door.

Penny’s not interested in dealing with Bishop’s crappy attitude, and Bishop’s too busy sneaking pills to care. Until he starts hanging out with Gramps and begins to see what he’s been missing. If Bishop wants a chance with the fiery girl next door, he’ll have to admit he has a problem and kick it. Too bad addiction is hard to kick…and Bishop’s about to run out of time.

My Thoughts:
'Out of Play' is a fabulous new book from Nyrae Dawn and Jolene Perry. I love books about rock stars and I love books involving sports (especially female athletes), and this one delivers both. This book definitely fits within the YA category, but I also thought it fit as borderline New Adult. The characters had quite a bit of independence in governing their daily lives, though it takes place at the end of Penny’s senior year of high school. Both characters are trying to figure out what is next, and how to deal with their lives changing.

Bishop is a broken boy character who could have easily become a stereotype, but instead he was deep and honest and real. He was such a fabulous layered character and I felt like his struggles were so true to life. Penny was an incredibly strong female lead: she takes no prisoners, she’s competitive and athletic. What I liked about Penny is that she was all those things, but it wasn’t all she was. She wanted her own Happily Ever After and wanted to be liked by a boy as more than just friends. I loved the slow moving, but deep, relationship between Penny and Bishop. They fit together so well as friends and more.

The secondary characters in ‘Out of Play’ were amazing as well. Penny’s hockey teammates were all three-dimensional, as were the people in Bishop’s life, but the character that stands out the most is Gramps. What a fabulous character! He also could have felt like a stock character, the wise old man who who gives advice and cracks jokes, but he came to life as so much more than that. I adored the way he interacted with Penny and Bishop, and you could really see the love he felt for both of them.

There are so many great things about this book. I loved the Alaskan setting and the hockey. I liked the dialogue about how one person's idea of a fabulous opportunity is not necessarily another's. I liked how Penny championed the idea that staying where you are and being happy at home doesn’t equal giving up.

‘Out of Play’ is a very well written book which flows seamlessly between the narratives. Nyrae Dawn and Jolene Perry have written a great novel, featuring a fabulous pair of characters, and I'd love to read another collaboration from them in the future.

The Cover:
Almost kissing/kissing covers are never my fave, but I like it alright.