Forget Me by K.A. Harrington 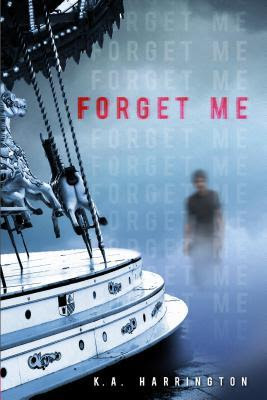 An edge-of-your seat psychological thriller with a romantic twist

On the three-month anniversary of her boyfriend Flynn’s death, Morgan uploads her only photo of him to FriendShare to get some closure—but she’s shocked when the facial recognition software suggests she tag him as "Evan Murphy." She’s never heard of Evan, but a quick search tells her that he lives in a nearby town and looks exactly like Flynn. Only this boy is very much alive.

Digging through layers of secrets and lies, Morgan is left questioning everything she thought she knew about her boyfriend, her town, and even her parents' involvement in this massive web of lies.

My Thoughts:
I was extremely intrigued by the concept of this book from the first time I heard of it. The very basic premise could have gone so many ways, which I really liked because it made it hard to predict. Forget Me is a straight up contemporary mystery/thriller, which we don’t see a lot of in YA. I can’t talk too much about the plot because it’s incredibly twisty, and it’s more like journey that you need to experience for yourself. What I can say is that I thought the author did a great job. The story ties together in such an interesting way. I loved the mystery solving aspect and how it made sense that teens were the ones doing the detective work, figuring out if there was some kind of conspiracy.

Forget Me has an eerie feel to it, especially at the beginning when you have no clue what's going on. Granted, I started reading it late at night, but an abandoned mini golf course is genuinely creepy. Most of all, though, an abandoned amusement park. Can you say fun house mirrors?! The book has some definite pull the covers up to your chin moments.

There are a lot of great aspects to this book, with one of my favourite parts being the friendship between Morgan and Toni. I love celebrating awesome female friendships. Both girls here felt like fully realized characters, and they were unflinchingly supportive of and loving to one another.

Overall? I found Forget Me to be a very intriguing and satisfying read.

The Cover:
Like! Perfect creepiness. (Although I have to admit when I see a smaller version I keep thinking the carousel is a boat.)