The Understatement of the Year by Sarina Bowen 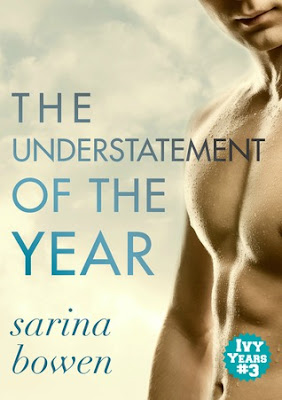 Five years ago, Michael Graham betrayed the only person who ever really knew him. Since then, he’s made an art of hiding his sexuality from everyone. Including himself.

My Thoughts:
When it comes to Sarina Bowen’s novels I’m automatically swept up in the characters and their situations. I always feel so attached to her characters, wanting to know them and their stories. The Understatement of the Year was no exception. It's Sarina’s most hockey focused book yet in her Ivy Years series, with the novel taking place during hockey season and with both of the heroes being part of the team.

I definitely felt a deep ache when it came to Graham’s character. He is so deeply in the closet and so completely terrified of being found out, so Rikker's reappearance in his life is troubling. I was definitely angry at him for denying Rikker, but he’s not someone you can condemn, considering you can really experience his complete panic and fear, knowing how an incident when he and Rikker were younger completely shaped his future. Rikker, on the other hand, has become this model gay guy without wanting to be. He's out (though not by his choice, hence why he's so understanding of Graham), he's had boyfriends, and he's the first out Division 1 hockey player.

As usual, Sarina Bowen did a fantastic job with secondary characters. I loved Bella, who we will be seeing in her own book in the future. Bella first appears as this slutty hanger-on stereotype, but she's so much more than that. I adore books that subvert tropes and show that a person can appear one way and be another or that they can be one way or do one thing, but also be someone else. Another favourite character is Rikker’s grandmother, the person who became his rock when his parents basically disowned him. She is a firecracker and their relationship was adorable.

One thing I think that this author always succeeds at is epic chemistry and there was definitely that between Graham and Rikker. The wanting, the anticipation, the massive history between them -- all of it is so close to boiling over for so long, and it’s delicious to experience. What I really liked about this story is that there wasn’t any perfect answer to everything. It wasn’t just like a switch flipped and suddenly Graham would be cool wearing a rainbow flag. It’s a gradual process for them to be together, and a gradual process for Graham to come to terms with who he is. Even in the end it’s a work in progress, but it’s a beautiful one.

The Understatement of the Year is a story of self acceptance and learning to love yourself. It’s a painful journey for Graham, and even an awkward one for Rikker at times, when he has to deal with his teammates’ reactions to his sexuality. There were various reactions to Rikker being an openly gay hockey player, and they felt realistic to me. The majority of people didn’t care or at least didn’t make a fuss about it, but there were a few very supportive people and a few who were the vocal minority, being complete assholes about it. That range of reactions felt true, and I loved how Rikker himself was aware of it, grading those around him on his own personal Rikker Scale based on how cool or not cool people were.

This is a heart wrenching book, a sexy book, a romantic book, and, yes, a funny book too. I loved the characters and I thought the story was so well told, which is no surprise. I've come to expect amazing romantic fiction from Sarina Bowen, and she never disappoints.