I read Outlander by Diana Gabaldon in August 2013, a couple of months after it was announced the show had been picked up and around the time the actors were being cast. It was the talk on Twitter and on book blogs that got me interested in this book, and in watching the TV show, which is why I think it's pretty cool that Shaw Media reached out to me and other book bloggers to review the TV show.

If you haven't heard of the show or don't know the specifics, here's a little about it:

Outlander follows the story of Claire Randall, a married combat nurse from 1945 who is mysteriously swept back in time to 1743 Scotland, where she is immediately thrown into an unknown world and her life is threatened. When she is forced to marry Jamie Fraser, a chivalrous and romantic young Scottish warrior, a passionate relationship is ignited that tears Claire’s heart between two vastly different men in two irreconcilable lives.

By now I've watched all the episodes that have aired in Canada, but to give you a taste of the show here are my thoughts on the first two episodes. 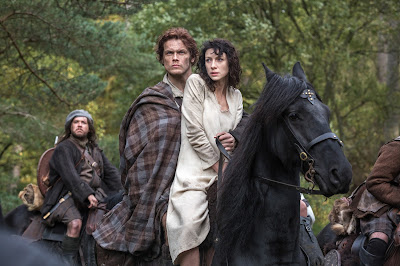 I thought this was a good introduction episode. It might be a bit slow at first if you haven't read the book and don't know what's coming, but it's hard to say. It needed those set up moments, and there's definitely a sense of "something's going to happen". I thought they did a good job of showing Frank and Claire, how there's true affection and desire between them, but also some distance in their marriage.

There were definitely a few parts of the episode that were very convenient and foreshadow-y, like of course she knows all about botany and the medicinal application of plants and of course she's an ultra-special "not your typical 1940s female", growing up with her archaeologist uncle, etc. These aren't the fault of the show, as I felt the same way while reading the book, I think they just jumped out a bit more when they were presented as voice over and asides within the limited show time.

Overall my impression was quite a positive one. The scenery is just GORGEOUS and they did a great job of showing it off. The casting seems spot-on: I liked what we've seen of the actors so far. Caitriona Balfe has the perfect spunk for Claire, and Sam Heughan is -- let's face it -- gorgeous, but more importantly, he seems just right for Jamie.

Sassenach is definitely an intro episode, giving us just a hint of what's to come, but that was exactly its job. Most importantly, the glimpse it provided was one I really liked. It's always interesting to see a book come to life, to see the vision of the producers and the director, and I enjoyed watching this first episode. 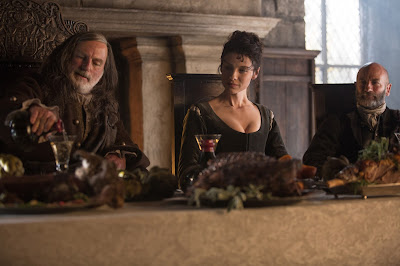 This second episode is a good continuation of the story. We see a bit of what Claire has to deal with and how she deals with it. This episode seemed to have a bit of a slower pace to it, which had me checking my watch a few times, but it never truly lost my interest. There were a couple stand out scenes for me, one being when Claire is at dinner weaving a fake story about her life, and another being when she takes dinner to Jamie at the stables. There's definitely huge chemistry between Claire and Jamie. I love that it's there in the background already; it shows me they're doing a great job at weaving things in to the show for the future.

I didn't count them, but it felt like there were a lot of flashbacks to things that happened in the first episode. I understand that Claire is having déjà vu to things that were only a few days ago for her and that actually happen hundreds of years in the future, but sometimes it felt like too much. Maybe it was because I watched Episodes 1 and 2 at the same time, but it was like "Yes, we know she went in that particular room. Get on with it already!".

What I thought this episode did well was showing the balance Claire has to maintain. On the one hand she has to try to deal with her surroundings and survive (i.e. don't give people any more reason to think she's a spy), but on the other hand she's very determined to return to Inverness and find a way back home to Frank.

This was a smaller scale episode, taking place at the castle, rather than the journey of the first episode, but I enjoyed seeing how the castle ran, who was in charge of what, etc.

Overall impressions:
The show has a quiet pace to it in some parts, but there are also great action scenes, so I think they balance each other out nicely. While the voiceover was a bit much in some parts it also provided key information that I really don't think could have been presented in any other way, and I liked hearing Claire's thoughts. The scenery is gorgeous, the costuming is amazing, and the actors are perfect for their roles. It felt like something true. What I mean is (and not that I'm an expert on the period or anything), it felt like it was accurate and you were really watching a scene from the past come alive. I truly enjoyed these first two episodes of Outlander, and I'm interested to see where they go with things from here.


Outlander airs at 10 pm Sunday on Showcase in Canada.