All These Things I’ve Done by Gabrielle Zevin 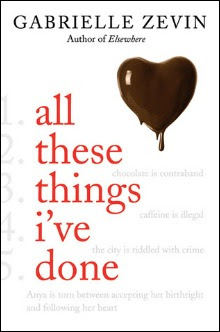 Synopsis: (from Goodreads)
In 2083, chocolate and coffee are illegal, paper is hard to find, water is carefully rationed, and New York City is rife with crime and poverty. And yet, for Anya Balanchine, the sixteen-year-old daughter of the city's most notorious (and dead) crime boss, life is fairly routine. It consists of going to school, taking care of her siblings and her dying grandmother, trying to avoid falling in love with the new assistant D.A.'s son, and avoiding her loser ex-boyfriend. That is until her ex is accidently poisoned by the chocolate her family manufactures and the police think she's to blame. Suddenly, Anya finds herself thrust unwillingly into the spotlight--at school, in the news, and most importantly, within her mafia family.

My Thoughts:
Despite the fact that I own ‘Elsewhere’, this is the first Gabrielle Zevin book I’ve read. Well it definitely won’t be my last, because I really enjoyed this one. The writing style could almost be described as ‘quiet’, but I think it might be more accurate to say that Anya’s voice was very matter of fact. Even very intense moments are reported very factually, because Anya is the type of character who thinks that showing emotion is weak. She’s not heartless, she’s just had a lot of tragedy in her life, and growing up as a mob boss’s daughter has not been easy.

Anya is so great because she’s not warm and fuzzy in any way, but you kind of can’t help but like (or at least admire) her. The most important thing to Anya is taking care of her siblings. This goal is always foremost in her mind, and it makes the way she looks at things and the decisions she makes very interesting.

I really enjoyed the way this book was written, with Future!Anya going back and telling the story to the reader. I know it bothers some people, but I adored how she was talking directly to us as readers. It didn’t happen a lot, but it was just so amusing when she interrupted her own narrative to point out things like: “Yeah, that was foreshadowing.”

It almost seems like we don’t get to know any of the other characters that well because Anya has a hard time letting people in. But the ones we did get to meet, like Natty, Leo, and Win, I absolutely adored. Win was just adorable. He’s incredibly sweet and decent, and he gets guarded Anya to let down her hair a bit, so to speak.

The one thing that’s a bit lacking in ‘All These Things I’ve Done’ is the world building. We don’t get to find out why coffee and chocolate were banned, and we don’t know why supplies of such things as paper and water are so low. There are some mentions of disease, but that aspect isn’t explored either. The thing is, though, these missing aspects don’t feel like a big deal when you’re reading the book, because it’s so much more a personal narrative of Anya and her family than it is a full scale post-apocolyptic or dystopia. It also makes sense that a teenage girl who’s had such a crazy tough life would be more internally focused, not really paying attention to history. I also have a feeling that we’ll learn more about these things in the next book as Anya grows up a bit and gets involved with more outwardly thinking ventures.

I was surprised and impressed with this book. It was such a quick read for me because I adored Anya’s narrative voice. I was also drawn in by the whole mob family lifestyle, and the politics that went on between family members. Pick up this book for a character driven novel which includes a romance that becomes the catalyst for a lot of events which are bigger than the characters themselves.

The Cover:
I love it because it's so different from the typical YA cover. The dripping chocolate heart is brilliant.