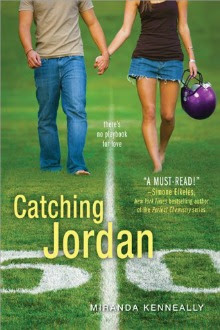 Synopsis: (from Goodreads)
What girl doesn't want to be surrounded by gorgeous jocks day in and day out? Jordan Woods isn't just surrounded by hot guys, though-she leads them as the captain and quarterback of her high school football team. They all see her as one of the guys, and that's just fine. As long as she gets her athletic scholarship to a powerhouse university. But now there's a new guy in town who threatens her starting position... suddenly she's hoping he'll see her as more than just a teammate.

My Thoughts:
I swear the last time I had this stupid of a grin on my face throughout a whole book was 'Anna and the French Kiss'. I know! That is a massive compliment because of how much I adore ‘Anna’, but I really thought the tone of 'Catching Jordan' was quite similar. The other main comparison I can make easily is with ‘Friday Night Lights’, which just happens to be one of my favourite TV shows ever. How these two are similar is because even though this book is about football, it’s mainly about Jordan figuring out who she is and what she wants. Football is a big part of who she is, but it’s not really the book’s main focus.

So, Jordan. Jordan is one of the coolest main characters I’ve read about in a long while. She seriously cracked me up because she was a total tomboy and the way she said things sometimes was just so not like a typical girl. But then she also had all these thoughts about guys, and she was just so down to earth and relatable. Most importantly she had inner strength: she knew her worth and wouldn’t let people put her down or control her.

I don’t want to say too much about the romance, because it’s kind of twisty turny getting there, but let’s just say that it’s AWESOME. Epic, amazing, awesome. I loved Jordan’s relationship with her best friend, with her family, and with all her football teammates. All of the relationships were so complex, and they just felt real. I liked how there was the stereotypical bitchy cheerleader, but also awesome fun cheerleaders who Jordan gets to know and realizes what she’s been missing by only having guy friends.

If I had to name one issue I had with this book it would be the promiscuity of the football players, especially one guy in particular. Does it happen in real life? Yeah, probably. But it felt weird to me that everyone seemed okay with it, even the really cool girls who seemed to have a good handle on their self-worth. It just seemed to be swept under the rug too easily. But did that issue impede my overall enjoyment of the book? No, definitely not.

This is the first book in forever that I’ve been so giddy over. I’ve been looking forward to reading it for so long, so I had to read it as soon as I got my copy from Netgalley. From the synopsis I knew I would enjoy this book. I thought it might be cute and fun, and it was, but it was also much more than that. I didn’t expect to adore the characters as much as I did, and I didn’t expect so much self-examination from Jordan. ‘Catching Jordan’ is a book that will surprise you with its depth. If you are at all a fan of contemporaries or contemporary romance, you must add ‘Catching Jordan’ to the top of your list. I'm so glad I read it, and I've already ordered a copy for myself.

The Cover:
It's cute! I like how it shows the football and romance elements of the book.