Yesterday afternoon the people at the Duke of York either found a passion for reading, or decided they never wanted to see another book in their lives. I'm hoping for the first option, obviously.

So why is that? Well, a group of close to 40 Ontario book bloggers descended on their pub for the first (hopefully annual) Ontario Blogger Meet Up. And it was epic!!!

For those who are curious, here is the link for the Ontario Blog Squad.

Well yesterday was a lot of fun. It was great to meet people I had been talking to for a long time and put names to faces, because even if you've seen pictures or watched vlogs it's obviously so different to connect in person.

I know once more people write up recap posts there will be pictures (I uhhh forgot my camera at home -- oops), but for now here are some details.

I sat at a table with Audrey, Lindsay, Penelope, & Hayley, which was very cool. I also got to have a nice talk with honourary Ontario book blogger [ ;) ] Danya. It was great to meet Liz, Brenna, Jen, Michele, Angel ... & ummm so many other people!

Besides just awesome book talk there were also trivia questions, of which I was able to answer one (name three Canadian authors; my answers were Kelley Armstrong, Lesley Livingston, and Alyxandra Harvey). Then there were prizes drawn from raffle tickets (I believe my ticket was drawn with the last book in the box, and I was able to pick up an ARC of 'Purity' by Jackson Pearce), andddd the grand prize provided by Kobo was a Kobo Touch which Hayley ended up taking home.

Basically it was an awesome couple of hours chatting with everyone. I just wish I had been able to talk to everyone there, but it was almost impossible because of the room set-up. Still, it was a crazy good time, and everyone was super nice and welcoming.

Another awesome part of the event were the crazy cool goody bags everyone received upon checking in. All of this is in my 'In My Mailbox' post this week, but I thought I would put it here too. 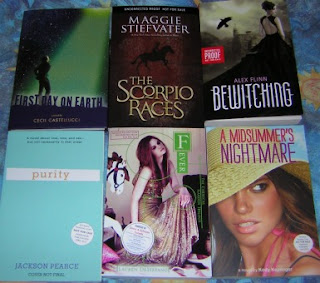 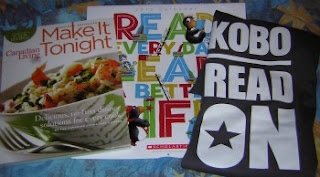 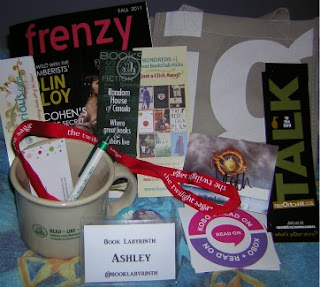 & some awesome swag, including...

I definitely wasn't expecting all that, so thank you so much to the Canadian publishers who provided all the books and swag for us. It's a serious treat; I feel very blessed to have received all that!

I've said it a few times, but thank you also to the organizers of the meet up. I know you ladies worked your butts off, so hats off to you!

Basically: awesome, awesome afternoon with some awesome people (I feel like Marshall from HIMYM, I'm saying 'awesome' so much; or maybe Barney -- "When I get sad I stop being sad and be AWESOME instead. True story!").

(And if you read all that, you totally deserve a prize. Cookie?)