Please welcome author Melissa Turner Lee to Book Labyrinth today. She's here for a guest post AND interview, plus a giveaway that you might enjoy. First, here's a little bit about her book: 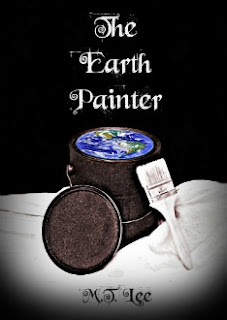 When a self-conscious young woman discovers the boy in drama class is actually the immortal who painted the world into being, she becomes the target of another painter who hates humanity. The Earth Painter is a Young Adult Supernatural Romance set in the small mill town of Chesnee, SC. It revolves around Holly Scruggs, who's family has just moved back to Chesnee after her dad lost his job along with pretty much everything they owned. Her image conscious parents correct her to the point of brokenness until she meets Theo. He is the artist responsible for all the beauty of the land and he thinks Holly is beautiful too. Together they will fight against Fritz, the water painter who hates humans and is hiding a secret under the high school.

When I was a kid I loved the original Star Trek. Some of you might know the characters from the new movie. But I was sooo in love with Mr. Spock, the uber logical Vulcan stuck on that spaceship with Bones and Captain Kirk. Such different personalities and yet the relationship worked.

When Star Trek The Next Generation came out, I fell in love with Data, the logical android longing for human emotions.

Well, I have pretend people living in my head and write about them. They interfere with how well I function in the real world and so I’m very drawn to logical people to help ground spacey me. When I was 17 I met and fell in love with my own Asian version of Mr. Spock. Very logical. Very grounded in the real world. Almost no imagination whatsoever. And like the original Star Trek, the relationship just works. But not without some funny moments.

The first time I told my husband that I sometimes told myself stories at bedtime, to help me fall asleep, he looked at me like I was insane.

And then I started having characters who demanded I tell their stories. And their stories tended to play out while I took a shower. My sweet Mr. Spock came to check on me while I laughed hysterically in the shower. “What are you laughing at?” he asked.

“Oh, the people in my head are having the funniest conversation.”

My Mr. Spock backed away, “Seems this shower is pretty crowded already.”

Then there was the time my shower lasted an hour and a half because I lost track of time listening to my characters fight. There was good stuff happening and I couldn’t walk away. Again my husband shook his head at his silly spacey wife.

And then I self-published. And my husband snorted, reminding me of the percentage of writers who actually make money on their writing. Remember, he is logical. Always logical. He cautioned me not to have unrealistic expectations.

And then I started getting fans. And good reviews. And people buying my book. And then, my sweet husband invested some more money to help with my publishing. Because my Mr. Spock loves his spacey wife and believes in her, even when it goes against his logic. And he’s sort of starting to believe in the crazy idea of living one’s dreams and making them a reality. It’s a stretch for him and I love him all the more because I know he’s going against his nature to be supportive.

The world is made up of people with different ways of seeing things, and I think it works out beautifully when they seek to mesh instead of argue. You can see that in The Earth Painter, where the world was created by purely creative artists and then managed by purely logical sciences. They both see things their way and they are both right. And together, the world is both beautiful and functional.

If you had to describe the premise of The Earth Painter in a tweet (140 characters or less), what would you say?

A girl meets the artist responsible for the beauty of the land,and discovers her own beauty, while facing the immortal out to destroy it all

What inspired the story of The Earth Painter?

A long period when Doctor Who was on break, combined with the boredom of laundry. I was putting away laundry and discovered these characters living in my old high school there in my head and had to write it down.

So if you only had 3 words to describe your main character, Holly, what would they be?

What has self-publishing been like? Do you have any tips or advice for writers looking to self-publish?

It has its ups and downs. There are those who decide that being self-published means it's not good before they read it. There are the traditionalists who tell you that you are making a big mistake. But then there are fans around the world literally begging for the sequel. I've had a very positive experience with the bloggers and reviewers. The only tip I have is to put your pride aside and your fear and be prepared to ASK people to read your book...all the time.

What do you like to do in your spare time? How do you juggle writing and family?

Spare time? What is that. I'm a mom of 3 boys. The oldest 8 years old. I've had to get rid of much television viewing and my own love of reading only happens between projects. But it's so worth it. I write because there isn't anything else I can do. I've had jobs and the characters in my head always get in the way. They are always there telling me their stories and I get no peace until they are out to be shared.

Thanks so much for stopping by, M! I appreciate the time you took to write the post and answer my questions.