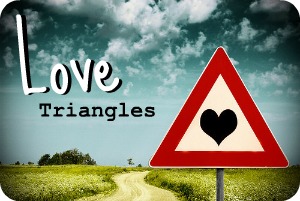 I’ve been wanting to write a discussion post on love triangles for SO LONG. Most recently I was inspired by the thoughts in Brenna’s post about Boys in YA and Lisa Bergren’s on The Perils of Love Triangulation. So, here it goes:

I'm not a fan of love triangles in most books, because they seem to be there as a gimmick. Like it's expected or something, especially in YA paranormal romance. And most of the time I really dislike them because they're very badly done. There's the best friend who's always been there and happens to be in love with the girl, and then there's a new gorgeous and slightly dangerous guy who the girl wants to be with despite his emotionally abusive actions. I'm totally generalizing, but that's the basic pattern I see over and over again, and it just doesn't work at all. It doesn't make sense, and there's no real reason for the triangle. There are so many other sources of tension you could create, and I would so much rather read about the development of a relationship over the course of a novel instead of insta-love and fighting over the inclusion of a second romantic option. 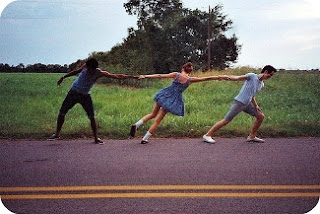 But there are also love triangles that make a lot of sense. I don’t think there’s just one person out there for each person. It takes a huge combination of personality traits and actions for that one person to suddenly appear special. Now most of the time in real life I don't think a girl has two guys fighting over her, but in a book I think it works to help tell the story of who the character is and what direction she's going in, how she's learning and growing... her choice of guy helps tell this story to the reader. I would never want to wrap up a woman’s identity in her choice of man, but I do honestly think that all our choices (friendship, romantic, heck even our favourite colours) make us who we are and help show that to others. And then there’s the humanity factor. Of course it makes sense for someone to sit up and pay attention when two suitors are presented. We're only human, right? We like validation about our own worth. 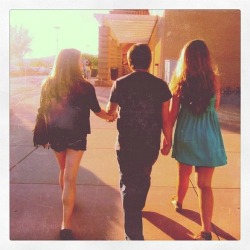 Where I think love triangles work well is where both guys are equally good options for the main character. They both care for her and respect her, and you could actually see her with either guy. I always think of the Shade trilogy by Jeri Smith-Ready as my example for this. I may not be the biggest Logan fan but it’s clear that he loves Aura, and without the whole non-corporeal ghost issue (no big, right?) it’s clear they would still be together. But then there’s Zachary who also loves Aura, and he has that small benefit of being alive. ;)

What are your thoughts on love triangles? What are some examples of books that do this really badly OR really well? I'd love to hear your thoughts!