Nuayma Jeggels is an author whose first novel is an epic fantasy with zombies. Sounds like a pretty awesome combination, right?! Here's a bit about 'Raven', the first book in 'The Violet Jewel' series: 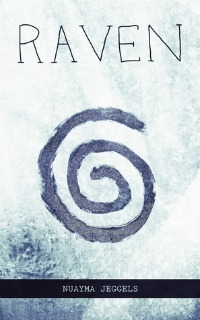 A girl, a coma, a Plague, and an empty grave.

When Shardaie wakes up, she doesn’t know who she is, why she can’t understand emotions, why she has been unconscious for nearly nine of her thirteen years, or why the dead just won’t stay dead. The only clue to her past is a locket, but the Plague, which finally stretches its unnatural hand to her village, forces her to leave and to learn to protect herself. But everything has a cost: the protection against the undead reveals a secret that Shardaie and her classmates just don’t want to accept, and at the end, Shardaie realises that some secrets shouldn’t be revealed. Secrets have the power to destroy, and the power to change her view on humanity for ever.

Today Nuayma wanted to share an outtake with you guys. It's about her main character, and it's not in the book, so it's a bit of an exclusive:

Shardaie was lying on her side on the floor, nose nearly pressed against the struggling lizard. Her violet eyes slowly blinked, watching as the creature waved its limbs and tried its best to get up and crawl away. Watching, but not understanding. She inhaled deeply, then released the breath as she muttered, “What are you feeling?”

The lizard’s eyes flitted this way and that way, and when Shardaie realised that the world had to look just too big for it, she rolled onto her back and stared at the ceiling. What was it feeling? She spread out her legs and her arms, trying to see the room from the lizard’s perspective.

Shardaie looked back at the lizard, but only found an empty space bathed in sunlight. She rolled onto her side, in the direction of her bedroom doorway, and watched as her guest scuttled away, its broken tail twitching occasionally. “Go,” she whispered, remembering the words a girl had once said to a different lizard, “be free.”

Then she pulled herself up, but when she straightened, she accidentally knocked her arm against the edge of the windowsill. Shardaie noticed the sudden prickling sensation in her flesh, and when she raised her arm, brow twitching as her eyes narrowed, she took note of the scratch and the thin line of blood that stood out vividly against her pale skin.

Wasn’t she supposed to be doing something? she thought as she tilted her head to the left and then to the right continuously, she was supposed to react, wasn’t she? Her arm lowered to her side. She looked up and licked her lips, thinking about the girl, who loved to speak to lizards, before turning to stare at the floor.

Shardaie began with her face: she started to arch her eyebrows and then opened and closed her mouth. Her calves twitched, so she started to shake her legs, but that turned into a hopping-on-the-spot. She tried her best to re-enact a scene she had witnessed a while ago, of a little child noticing a wound, but when she spun around, arms flapping in the air, she realised that she wasn’t alone.

Celio, her red-haired guardian, stood in the doorway, his hand on the doorknob. He cocked his head and then frowned at her. “What are you doing?”

Shardaie immediately stood still and smacked her lips. She looked at her arm, then raised it and replied, “I’m reacting.”

Celio looked at her arm, then glanced over his shoulder to address someone before turning back to her. “Give me a moment, child,” he turned around, but kept his gaze on her face, “keep your arm clean.”

Shardaie nodded at the suddenly empty doorway, turned around, marched up to her bed and sat down. She wriggled around for a moment, but sat still and stared ahead. Her eyes blinked. Her fingers twitched occasionally. A lock of her hair fell down to caress her nose. She looked at her arm and then raised it before sitting upright and staring at the doorway once more.

Stomp, stomp, stomp announced Celio’s presence, but Shardaie didn’t move and didn’t look away from the doorway. Celio walked into the room and sat down beside her, then took her raised arm and started to wipe a wet cloth over the scratch. Shardaie watched him work, watched how he bowed his head and slowly turned his wrist, but when he was done and he turned to her as though he was expecting something, she remained silent for a while before saying, “Thank you, sir.”

Celio nodded, looked away and studied his cloth. “Everything’s all right now.” He smiled at Shardaie, placed a hand on her shoulder and stood up. “It’s time for dinner. Come.”

Shardaie didn’t follow him, even when he made a beckoning motion with his hand, and when he had left the room, she looked back at her arm and thought. The prickling sensation was still there, but it was fainter. She looked at the doorway that both Celio and the lizard had used, then crawled across her bed and threw her blanket over her body and her head.

Her stomach clenched. Her bottom lip trembled. Shardaie closed her eyes, and as she felt her breath flutter across her upper lip, she started to wave her legs and her arms. Nothing. How was everything all right? Shardaie continued to wave her limbs. She still couldn’t understand what she was feeling …

Thanks so much for stopping by, Nuayma!