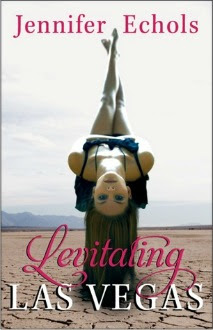 
Synopsis: (from Goodreads)
Nothing up her sleeves...or so she’s been led to believe.

My Thoughts:
What I loved about this book is that it’s so different from any other New Adult out there. I love the idea behind the New Adult genre, but so many of the books seem like carbon copies of one another. Thankfully Jennifer Echols knows how to write fresh and interesting books, and this is definitely the case here: I haven’t read anything like it. It’s a New Adult that’s paranormal, which automatically makes it different, and it’s centred around a casino in Las Vegas with a magician’s apprentice as the protagonist.

The concept of the book is super interesting, though while unique to New Adult, it’s one that’s been done a lot in speculative fiction. It’s a typical trope of the genre to have a group of people with super powers/abilities and a subsection of that group wanting to take over and use the power for bad things. Where Echols keeps things unique is in the way that the characters keep their children away from the “bad guys”: they convince the kids that they’re mentally ill and put them on medication until they’re old enough to defend themselves and become part of the group officially.

I liked how we’re hearing from main characters who actually think they’re crazy. As readers we’re being introduced into this world almost at the same time as Holly and Elijah are (although we do get to know a bit more, also hearing from the perspective of Kaylee). At the same time, because of these limited perspectives I don’t think we get an organic look at the world building. There’s a lot of telling instead of showing, and I never quite understood all the motivations of characters. While the concept is interesting, I don't get how making your children think they have a mental illness would somehow make them loyal to you in the future. There were other character decisions I didn’t understand either; I feel like the fast paced action didn’t really allow me to get to know the characters on a deeper level.

The scope of the book is so much focused on the relationship between Holly and Elijah, so I feel like I should have enjoyed them together more than I actually did. I didn’t quite relate to their relationship because it’s like the years when they didn’t speak just didn’t happen. It was weird how they acted like a brief flirtation in high school was the highlight of their romantic lives, and that they just picked up from there.

I saw one review that described ‘Levitating Las Vegas’ as "all over the place", and I would tend to agree with that. The book has a frenetic feeling to it with the drugs, the glitzy casino setting, and all the people trying to stop these two characters. I give Jennifer Echols props for writing a unique New Adult title, but while this was an interesting reading experience, it’s also ultimately forgettable. I never really cared that much about the characters, and I didn’t feel like I had a full understanding of the world or the character motivations.