When You Were Here by Daisy Whitney 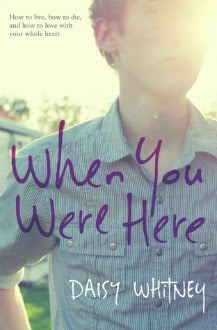 
Synopsis: (from Goodreads)
Filled with humor, raw emotion, a strong voice, and a brilliant dog named Sandy Koufax, When You Were Here explores the two most powerful forces known to man-death and love. Daisy Whitney brings her characters to life with a deft touch and resonating authenticity.

When he gets a letter from his mom's property manager in Tokyo, where she had been going for treatment, it shows a side of his mother he never knew. So, with no other sense of direction, Danny travels to Tokyo to connect with his mother's memory and make sense of her final months, which seemed filled with more joy than Danny ever knew. There, among the cherry blossoms, temples, and crowds, and with the help of an almost-but-definitely-not Harajuku girl, he begins to see how it may not have been ancient magic or mystical treatment that kept his mother going. Perhaps, the secret of how to live lies in how she died.

My Thoughts:
Daisy Whitney has a special way with words. The things that she writes just reach out and touch my heart. It sounds cliche, but I find her writing incredibly meaningful. I love how the themes in ‘When You Were Here’ (love, life, loss, finding meaning) are universal, and yet it felt like Danny's words were meant directly for me, for me to feel & experience.

This one stands out to me, first and foremost, because of the male narrator. Danny is a lovely character: so sweet and a little bit broken as he copes with the death of his mother. The book is sad, of course, because of the theme, but it was the type of sad that I can handle. It was bittersweet throughout, with a few bursting moments of hope and renewal at the end.

The book also features two main female characters, Holland and Kana, who are very distinct from one another, and yet I adored them equally, in such different ways. I really loved the platonic friendship between Danny and Kana. It just felt so perfect to me, that representation of an incredibly meaningful relationship between a boy and a girl that wasn't romantic.

‘When You Were Here’ is sad but hopeful, and I found it to be beautiful and moving. It has a great travel aspect with Danny going to Tokyo, and also features an incredibly sweet relationship between a guy and his dog. This book is just so lovely and I highly recommend it; my first thoughts after finishing it were: 'So. Freaking. Good.'

Find When You Were Here by Daisy Whitney on Goodreads, Book Depository, & Amazon.