You Look Different in Real Life by Jennifer Castle 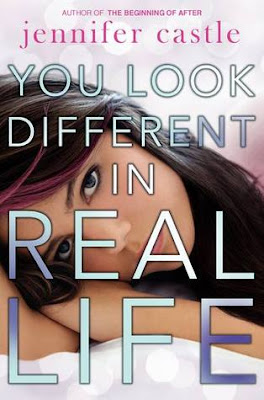 
Synopsis: (from Goodreads)
For the rest of the world, the movies are entertainment. For Justine, they're real life.

Now sixteen, Justine doesn't feel like a star anymore. In fact, when she hears the crew has gotten the green light to film Five at Sixteen, all she feels is dread. The kids who shared the same table in kindergarten have become teenagers who hardly know one another. And Justine, who was so funny and edgy in the first two movies, feels like a disappointment.

But these teens have a bond that goes deeper than what's on film. They've all shared the painful details of their lives with countless viewers. They all know how it feels to have fans as well as friends. So when this latest movie gives them the chance to reunite, Justine and her costars are going to take it. Because sometimes, the only way to see yourself is through someone else's eyes.

Smart, fresh, and frequently funny, You Look Different in Real Life is a piercing novel about life in an age where the lines between what's personal and what's public aren't always clear..

My Thoughts:
‘You Look Different in Real Life’ has a fabulous concept with filming kids every five years to see changes in individuals and in social groups. In the context of the book it becomes a real journey of who Justine is, what her passions are, and where she fits. Because of being on camera almost her whole life Justine has a real issue with who she actually is, versus how she expected herself to turn out.

Jennifer Castle touches on a lot of great issues in this book. There are friendships falling apart, and looking at whether you’ve truly grown out of them or whether they might be worth saving. As I said, I loved the filming aspect, and how this influenced how Justine saw the world and herself. My favourite part of the book was probably how Justine and Nate’s relationship progressed from zero contact to a type of understanding. Basically I enjoyed these characters, their relationships, and the role of the film and what it meant in their lives. This is another great YA contemp from Jennifer Castle.