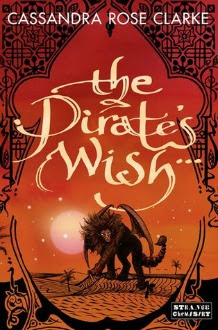 
Synopsis: (from Goodreads)
After setting out to break the curse that binds them together, the pirate Ananna and the assassin Naji find themselves stranded on an enchanted island in the north with nothing but a sword, their wits, and the secret to breaking the curse: complete three impossible tasks. With the help of their friend Marjani and a rather unusual ally, Ananna and Naji make their way south again, seeking what seems to be beyond their reach.

My Thoughts:
I highly enjoyed the first book in this series, The Assassin’s Curse, and this second (and final!) installment didn’t disappoint at all. Ananna is an incredibly funny narrator; she’s a character you can actually imagine growing up around pirates and having a bit of a tough upbringing. You can’t pull anything on her, and she’s so contrary and yet sweet underneath. Basically I find her totally adorable, but I would never say that to her face.

As I mentioned, this is the second and final book of the series. I didn’t know that it was a duology rather than a trilogy or series, so that would have been nice to know upfront. While reading the book I was pleasantly surprised by how much action there was, and how much happened to wrap up the overarching plot. There is definitely closure in this volume regarding the three impossible tasks and the relationship between Ananna and Naji. I don’t want to spoil too much, but if you’ve been shipping those two like I have, you won’t be disappointed. However, the romance aspect is the one part I would have liked more clarification on from one side of the party. What happened seemed real and yet way too sudden at the same time. All that being said, I reminded myself that we're reading from Ananna’s POV, and she’s pretty unreliable when it comes to presenting herself, so it’s hard to say what existed between the lines.

What I love about these books is just how much fun they are to read. There’s action, adventure, and piracy, and then there’s the fantasy aspect as well. There’s magic and curses, and, as you can see by the cover, a manicore. This character brought a lot of comic relief and also craziness to the book. If you’re looking for a hardcore epic fantasy tale then this definitely isn’t the read for you, but if you want a somewhat whimsical adventure with a fabulous heroine, then definitely pick this one up. ‘The Pirate’s Curse’ was a perfect conclusion to this duology -- it tells a complete story with a concrete, and yet open, ending. There are no tidy ribbons tied or a supreme Happily Ever After, but there was still happiness and hope. I loved how there were no easy answers, but there were good ones nonetheless.