Have you heard about Precious Things by Stephanie Parent? Stephanie is celebrating her book release with this book blitz during which time you can buy the ebook on sale for only 99 cents! Click to purchase on Amazon or B&N. 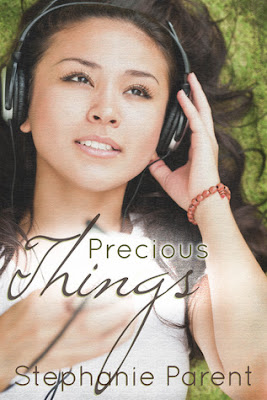 Isabelle Andrews isn’t supposed to be here. She isn’t supposed to be a freshman at Hartford Community College, she isn't supposed to be living at home and working at her dad’s failing bakery, and she definitely isn’t supposed to be taking Intro to Electronic Music Production, a class that will get her nowhere toward her goal of an English Lit Ph.D. by age twenty-five. But when her dad’s latest business fiasco eats up her college fund, Hartford Community College is exactly where Isabelle finds herself—and thanks to her late enrollment, she doesn’t even get to choose her classes. Stuck with Electronic Music and way-too-easy English courses, Isabelle is determined to wallow in all the misery she feels entitled to.

But community college brings some unexpected benefits…like the fact that a certain overworked, over-scheduled Electronic Music professor hands over most of his duties to his teaching assistant. His tall, green-eyed, absolutely gorgeous teaching assistant. When TA Evan Strauss discovers Isabelle’s apathy toward electronic music—and, well, all music—he makes it his mission to convert her. The music Evan composes stirs something inside Isabelle, but she can’t get involved—after all, she’ll be transferring out as soon as possible.

Still, no matter how tightly Isabelle holds on to her misery, she finds it slipping away in the wake of all Hartford Community offers: new friendships, a surprisingly cool poetry professor, and most of all, Evan. But Evan’s dream of owning his own music studio is as impractical as Isabelle’s dad’s bakery, and when Evan makes a terrible decision, everything Isabelle has gained threatens to unravel. Soon Isabelle discovers that some of the most important lessons take place outside the classroom…and that in life, as in Evan’s favorite Depeche Mode song, the most precious things can be the hardest to hold on to.

What the Heck Is the College Experience, Anyway?
by Stephanie Parent
In Precious Things, I really wanted to capture the so-called “college experience”…but the fact is that the college experience encompasses many different things, and is different for every person. There are the classes themselves, the social aspect, the dorms, being away from home for the first time, just to name a few. For me personally, since I am an extremely private person, the whole dorm culture/roommate aspect was so overwhelming (in a bad way) that it completely dominated my first semester. I know I had some great classes, was able to participate in a dance company for the first time in my life, and met some amazing people…but when I think back on that time, I get an overwhelmingly negative feeling, mostly because of all the dorm ickiness. (September 11th also happened right after I started college, which certainly didn’t help, but that’s a whole different post…)

My experience with dorm life is actually one of the reasons I chose to set Precious Things at a community college without dorms, with my main character still living at home. I wanted to show that not everyone has the same stereotypical “college experience,” and that missing out on it isn’t necessarily such a bad thing—and I also wanted to focus on other aspects of college, like the classes and the people.

At the same time, I tried to show hints of alternate “college experiences” through Isabelle’s interactions with her high school friends. Because of over-enrollment, Isabelle’s friend Jenny ends up sharing a two-person dorm room with two other people at the University of Maryland—and believe me, those dorm rooms are tiny enough with just the two people they’re meant for! This actually happened to a few high-school friends of mine, and they were absolutely miserable. And even at a top-tier school like Stanford, where Isabelle’s ex-boyfriend Andrew enrolls, roommates cause problems, with Andrew spending almost every night in the library to avoid his roomie (and especially his roomies “guests”). I knew plenty of people who went through this kind of thing as well, and at a time in your life when you’re dealing with a completely new environment, separation from parents and home, and most likely a much greater amount of academic work than you’re used to, it can be completely overwhelming. Contrary to popular belief, college students do need sleep, and that can be a challenge with strange people coming in and out of your room at all hours of the night!
And then there’s the whole social aspect of college…the frat parties, the drinking. Late in the book, Jenny explains to Isabelle why she decided to join a sorority, and her feelings about the situation pretty much match mine. (Although no, I never considered joining a sorority—I am way too much of a loner for that!) Here’s what Jenny says:

“I guess rushing was…it’s been my way of coping, and I’m glad I did it. College isn’t exactly like I thought it would be. It’s like…” She thinks for a moment. “Remember those huge parties in Ajel Cho’s basement, when he would invite the entire school?”

“You know how we acted like everything was so great, like we were so happy and excited to be there, when really we’d rather have been home watching movies and eating ice cream?”

“Well, college is sort of like that, but…all the time. You have all this freedom and you’re supposed to be having the time of your life, but sometimes you just want to escape and curl up on the couch to watch a movie, except you can’t, because…the party’s in your bedroom. And besides, there is no couch other than the ratty stained one in the dorm common room, which people are probably either hooking up or passed out on. Oh, and you’re also supposed to read more than you ever have in your life, and write twenty-page papers, and study for exams while all this is going on.”

So for Jenny, and Isabelle—and me—college is a lot more complicated than just having “the time of your life.” I hope I reflected that in Precious Things…and yes, I just might be courageous enough to tackle the dorm environment in more detail in my next NA novel!

One person will win an ebook of 'Precious Things', but if you don't want to wait, remember that you can buy the book on Amazon or B&N for the sale price of 99 cents (!!) during this Book Blitz only.