Secret for a Song by S.K. Falls 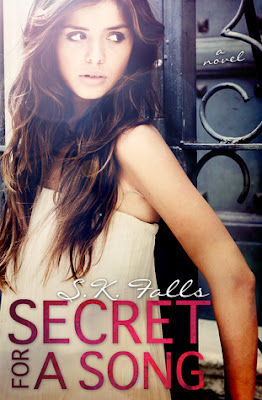 She ate her first needle when she was seven. Now, at nineteen, she’s been kicked out of college for poisoning herself with laxatives. The shrinks call it Munchausen Syndrome. All Saylor knows is that when she’s ill, her normally distant mother pays attention and the doctors and nurses make her feel special.

Then she meets Drew Dean, the leader of a local support group for those with terminal diseases. When he mistakes her for a new member, Saylor knows she should correct him. But she can’t bring herself to, not after she’s welcomed into a new circle of friends. Friends who, like Drew, all have illnesses ready to claim their independence or their lives.

For the first time, Saylor finds out what it feels like to be in love, to have friends who genuinely care about her. But secrets have a way of revealing themselves. What will happen when Saylor’s is out?

My Thoughts:
If I had one word to describe this book, especially at the beginning, it would be “unsettling”. It’s such an uncomfortable thing to read about a character who is so blasé about self-harming herself in so many ways. Saylor is a character who knows she’s hurting herself, but she gets a high from how it feels. This is a psychosis that's been ingrained in her for years, triggered by her want of attention from her emotionally distant parents. Now, this is something that normally I would shy away from reading about, but the way it’s presented seems so truthful and interesting. It’s so far from “normal” behaviours and ways of thinking, and yet as the reader you can’t help but empathize with Saylor in some way.

As the synopsis states, a connection grows between Saylor and Drew. It’s a beautiful relationship that feels built on trust and understanding -- they begin to truly know one another and teach one another, and yet the whole thing is built on a lie. It’s a painful thing to see this amazing relationship, when you just know it’s all going to come crashing down at some point. What I think is really beautiful, and so well done, is the gradual change you see in Saylor. It almost sneaks in there and you don't quite see how much she's grown at first, with actually being willing to see what’s she’s been doing as wrong, in how it’s affected their family, etc.

This is definitely a bittersweet story. It’s the type of book that you have to be in the mood for, so if you’re looking for a light read at this moment, I would hold off on this one. ‘Secret for a Song’ is gorgeously written and intricately plotted, a five-star read that I found incredibly interesting.

Find Secret for a Song by S.K. Falls on Goodreads, Amazon, and B&N. The author also has a great page for the book with FAQ and Book Club Questions.