Spies and Prejudice by Talia Vance 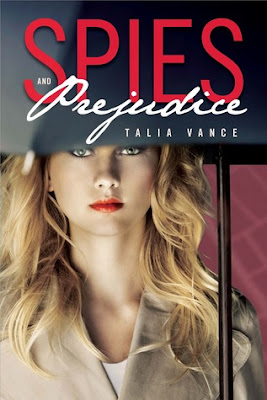 
Synopsis: (from Goodreads)
Pride & Prejudice meets Veronica Mars in this slick romantic spy-thriller where nothing’s as it seems.

Berry Fields is not looking for a boyfriend. She's busy trailing cheaters and liars in her job as a private investigator, collecting evidence of the affairs she's sure all men commit. And thanks to a pepper spray incident during an eighth grade game of spin the bottle, the guys at her school are not exactly lining up to date her, either.

So when arrogant—and gorgeous—Tanner Halston rolls into town and calls her "nothing amazing," it's no loss for Berry. She'll forget him in no time. She's more concerned with the questions surfacing about her mother's death.

But why does Tanner seem to pop up everywhere in her investigation, always getting in her way? Is he trying to stop her from discovering the truth, or protecting her from an unknown threat? And why can't Berry remember to hate him when he looks into her eyes?

With a playful nod to Jane Austen, Spies and Prejudice will captivate readers as love and espionage collide.

My Thoughts:
How much fun was this book?! So good! As the description states, basically if you combine ‘Veronica Mars’ with ‘Pride & Prejudice’ you’ve got ‘Spies & Prejudice’. That’s kind of a perfect concept for me since I love both. Our main character, Berry, is definitely complicated and layered. Berry is tough and snarky as she deals with the death of her mother, but she’s a total Veronica: someone you empathize with and cheer for, even when she’s quick to judge and makes some wrong decisions. We love Berry despite these things, because ultimately she just wants justice and is trying to do the right thing.

The main plot of the book revolves around an investigation that Berry starts when she spies her BFF's dad with a paper that has her mom's name on it. Berry’s on a quest to prove that her mom didn't kill herself, and along the way she has to decide how far she'll do to get information (e.g. could she betray her BFF if it brings her closer to the truth?). On the romance P&P side of things, our Mr Darcy is represented by Tanner, who brings some major sa-woon to the picture. He’s another very complicated character who has some secrets of his own.

‘Spies & Prejudice’ was such a great read, and I love how effortlessly high concept the book gets. There’s an intricate plot with spies and corporate espionage, and yet it still completely feels like contemp YA with friendship, family, and romance making up a large part of it. ‘Spies & Prejudice’ is the perfect read for fans of Veronica Mars, but it would also be great for Ally Carter fans, especially those who might want something a bit older feeling. I loved this book, and I can’t wait to see what the author comes out with next.