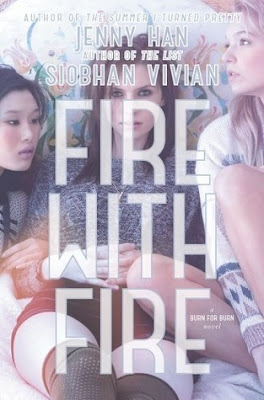 
Synopsis: (from Goodreads)
Lillia, Kat, and Mary had the perfect plan. Work together in secret to take down the people who wronged them. But things didn’t exactly go the way they’d hoped at the Homecoming Dance.

For now, it looks like they got away with it. All they have to do is move on and pick up the pieces, forget there ever was a pact. But it’s not easy, not when Reeve is still a total jerk and Rennie’s meaner than she ever was before.

And then there’s sweet little Mary…she knows there’s something seriously wrong with her. If she can’t control her anger, she’s sure that someone will get hurt even worse than Reeve was. Mary understands now that it’s not just that Reeve bullied her—it’s that he made her love him.

Eye for an eye, tooth for a tooth, burn for a burn. A broken heart for a broken heart. The girls are up to the task. They’ll make Reeve fall in love with Lillia and then they will crush him. It’s the only way he’ll learn.

It seems once a fire is lit, the only thing you can do is let it burn...

My Thoughts:
I really enjoyed ‘Burn for Burn’, the first collaboration between Jenny Han and Siobhan Vivian, but I may have liked ‘Fire With Fire’ even more. This book is quite lengthy, much more than I expected, but I still flew through it. It’s so easy to read, and the authors keep the atmosphere intense, leaving the readers dying to figure out what will happen next. I thought it was even more exciting, with higher stakes, than the first book.

‘Fire With Fire’ starts with the aftermath of what happened at homecoming at the end of ‘Burn for Burn’, and it largely deals with Mary's obsessive need for revenge against Reeve. You see different sides to each of the characters, never quite sure about what their true face is. The voices of the girls are so distinctive that you’re always clear from whose POV you’re reading. The girls are connected together in the revenge scheme, but outside of that they’re so different from one another.

The book is full of action, and it leads up to a rather epic ending and a revelation that completely shocked me. Even though it was a trope I’ve seen before, I only figured it out shortly before it was revealed. What's great, though, is that it didn't come out of nowhere. Once the revelation comes about you can look back and see where the authors planted clues. This is a definite game changer for the series, and it makes me so excited to see where the authors will go from there.

‘Burn for Burn’ and ‘Fire With Fire’ are amazing contemporary YA books with friendship, romance, and backstabbing that take place on a perfect island setting. What takes them to the next level is the paranormal element that weaves its way into the background of the books, becoming more and more prominent as the series continues. Definitely recommended.