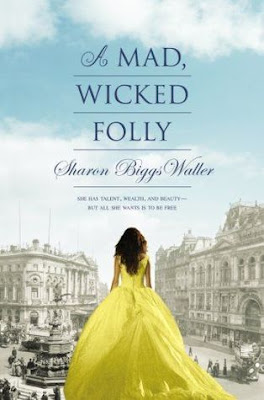 Welcome to the world of the fabulously wealthy in London, 1909, where dresses and houses are overwhelmingly opulent, social class means everything, and women are taught to be nothing more than wives and mothers. Into this world comes seventeen-year-old Victoria Darling, who wants only to be an artist—a nearly impossible dream for a girl.

After Vicky poses nude for her illicit art class, she is expelled from her French finishing school. Shamed and scandalized, her parents try to marry her off to the wealthy Edmund Carrick-Humphrey. But Vicky has other things on her mind: her clandestine application to the Royal College of Art; her participation in the suffragette movement; and her growing attraction to a working-class boy who may be her muse—or may be the love of her life. As the world of debutante balls, corsets, and high society obligations closes in around her, Vicky must figure out: just how much is she willing to sacrifice to pursue her dreams?

My Thoughts:
Despite the fact that I was a history major in university, I don't read a lot of pure historical fiction. The historical novels I do read tend to have some paranormal element to them. Despite these facts, I absolutely loved A Mad, Wicked Folly. The book features a smart and tenacious heroine whose story is period appropriate, but whose sensibilities will appeal to modern readers.

Vicky is such a lovely character. I enjoyed reading from her perspective so much. You would think that the life of a pretty, rich girl wouldn't be too hard, but when your station in society means ignoring the most important parts of you, it's quite a horrifying existence. Even though it made sense for the time period (I mean, heck, some people still feel this way), it was so sad and disheartening to see the attitude of Vicky's father. He feels that a woman is meant to be seen and not heard, and that a woman’s only role in life is to be an obedient wife and mother.

The attitude of Vicky’s father is juxtaposed with the appearance of the suffragettes. The book does a great job of portraying what they were doing to try and win the vote, and it shows how negatively they were viewed by most of the public. I liked their role in Vicky’s story, and how she is both inspired by and a little scared of them. While suffrage is something Vicky finds important, her real passion is for art. The main focus of the book is really about the lengths to which Vicky will go to have art as a part of her life. I actually found this aspect to be quite inspiring.

While the book doesn’t feature what I would consider a love triangle, there are two male characters vying for Vicky’s attention in very different ways. I completely loved Vicky's interactions with Will. He’s such a fabulous character, and those two together are fabulous. I have to say, though, that I kind of loved-hated Edmund too. While we know how women in history were controlled by their fathers and husbands, it was interesting to see how men could be stymied by their families too. While Edmund and Vicky are so different from one another, I liked seeing the similarities between them as well, and how they chose to deal with their situations. Both characters have big choices to make about what type of control they'll allow their families to have and what they're willing to give up.

A Mad, Wicked Folly is such a delightful read. The characters are lovely and the plot kept me enthralled. I enjoyed the reading experience very much and I highly recommend it to all YA fans.