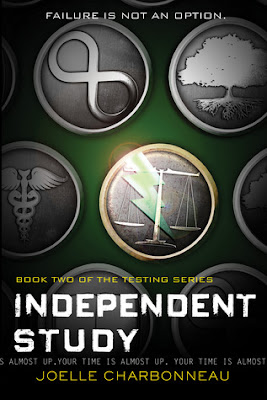 In the series debut The Testing, sixteen-year-old Cia Vale was chosen by the United Commonwealth government as one of the best and brightest graduates of all the colonies . . . a promising leader in the effort to revitalize postwar civilization.

In Independent Study, Cia is a freshman at the University in Tosu City with her hometown sweetheart, Tomas—and though the government has tried to erase her memory of the brutal horrors of The Testing, Cia remembers. Her attempts to expose the ugly truth behind the government’s murderous programs put her—and her loved ones—in a world of danger. But the future of the Commonwealth depends on her.

My Thoughts:
Note: This review contains some spoilers for Book 1, The Testing.

I very much enjoyed The Testing, so I was anxious to see what would happen in Independent Study. Thankfully this book was just as exciting as the first.

I love how these books are so action packed and yet they’re very internal. You really get inside Cia’s head and see how she thinks, what her process is, and what she feels. Not every book is like that, and I really appreciate it here, where you’re never sure exactly who to trust.

While the first book focused on the tests to get into the university, now Cia and her classmates are at the uni, but that doesn’t mean that The Testing has ended. Instead there’s a new type of initiation in order to be placed in an assigned field of study. The book features new obstacles and new potential enemies, while Cia still continues to deal with the old ones.

A large part of this book is Cia adapting to her new reality. As we saw at the end of The Testing, she doesn’t have full memories of what happened during The Testing, and has to rely on her own recorded memories to tell her what happened. She doesn’t want to believe that all those bad things happened, but increasing evidence and some recovered memories show her just how corrupt The Testing administrators are, and how the university runs much the same way.

I enjoyed watching Cia support the rebels by doing her own investigations. She’s a very logical and intelligent person, so having her trust her instincts and both fail and succeed in certain areas was interesting. I enjoyed the scavenger hunt type of induction that Cia and her classmates had to endure to enter their faculty, as well as the look at what the uni classes and internships were like. While there was definitely less of a romance in this book compared to the first, I didn’t feel like it was lacking in any way. I liked what we saw of Toma and Cia interacting, and how their relationship evolved under the circumstances.

As I said, this was such an exciting book, just as enthralling as the first. I love how Hunger Games-esque this series is in terms of theme, while still bringing completely unique things to the table, with the characters and the circumstances. I’m quite excited to see where things end up in Book 3, Graduation Day.

The Cover:
Like! (Though once again I think the UK cover is way more kick ass)