The Secret of Isobel Key by Jen McConnel (Excerpt & Giveaway) 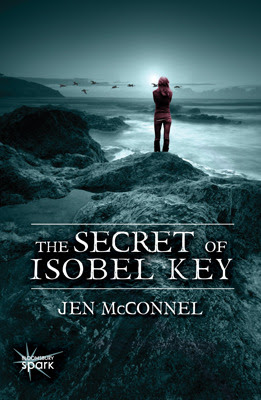 Lou is in the middle of a quarter-life crisis. Fresh out of college, she’s unemployed and unsure of herself. But when she gets the chance to escape to Scotland with her best friend, it could be the answer to her quest for self-discovery. The trip is not at all what she expected, especially when her tour guide turns out to be the dreamy historian Brian, and together they embark on a hunt for information about Isobel Key, a woman accused of witchcraft in the seventeenth century.

They set out to learn the truth of the condemned witch, but Lou isn’t prepared for the knowledge that awaits her. She must face her own demons if she has any hope of righting the wrongs of the past. Flashing between the seventeenth century and modern day Scotland, The Secret of Isobel Key is a mystery that will please readers of all ages.


EXCERPT:
“All right, you folk. Today we’ll be travellin’ out to Skye, the loveliest island anywhere in Scotland, or the world for that matter.” The soothing accent of their handsome tour guide carried through the small bus via the microphone, and Lou sat back in bliss, letting the words roll over her. The accents here in the Scottish Highlands almost made up for the dreary, damp weather, and she loved listening to the locals say just about anything. Admittedly, she would listen to Brian say anything, even without his accent. The tall, red-haired Scot reminded Lou of the men on the covers of the romance novels she’d sold at the bookstore, and she kept her eyes pinned on him as the bus bounced along. His khaki cargo pants rested casually on his hips, and he looked like a cross between a fashion model and the boy next door with his navy blue fleece zipped partway up. The green collared shirt he was wearing underneath the jacket was plain and simple, but Lou kept staring at the neckline, watching for any telltale curls of chest hair. Did his body hair match his flaming red head? Lou blushed at the thought and closed her eyes, wondering what it would be like to run her hands across Brian’s broad chest. Would he feel like sandpaper or satin under her fingertips?

A cymbal-shaking jolt of thunder abruptly pulled Lou out of her fantasy, and she blushed, glancing at Tammy. Her best friend seemed oblivious to her daydreams; Tammy was reading furiously in her guidebook, probably trying to learn everything about wherever they were headed. Lou glanced at Brian once more and then turned her attention to the window. The landscape was a brilliant emerald green, but the sky had begun to resemble heavy slate waiting to crush the unsuspecting earth beneath it. “It would be really beautiful, if it weren’t always raining,” Lou muttered to herself. Tammy looked up from her guidebook, her green eyes unfocused.

“What’dya say? Is it raining again? Aw, Lou, you remember what Brian said on the first day of the tour; everything’s more dramatic in Scotland!” Tammy sounded annoyingly perky for someone who would soon be hiking across a muddy landscape toward whatever rustic destination the tour would take them on today. Not only did she sound perky, Lou considered, but she looked perky: perky and perfect. Her silken blonde hair looked tousled just enough to be sexy, and her skin seemed to be drinking up the moisture around them; her cheeks were dewy and soft. Lou wished she looked half as at ease as Tammy, but she knew that her lumpy hat and wild hair made her look more like a hobo than a hot college student on vacation, and she sighed. Traveling with Tammy wasn’t as much fun as she’d thought it would be.

Shifting in her seat, Lou gazed out the window at the rivulets of water cascading down the bus. “What would they call it if the sun came out? Just for a minute.”

“We’d call it a miracle,” a deep voice beside her shoulder answered. Lou’s heart sped up as she whipped around, red in the face. Brian, the tall, ruddy tour guide, was standing in the bus aisle beside her, smiling. 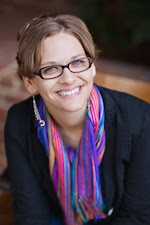 About Jen:
Jen McConnel first began writing poetry as a child. A Michigander by birth, she now lives and writes in the beautiful state of North Carolina. When she isn’t crafting worlds of fiction, she teaches college writing composition and yoga. Once upon a time, she was a middle school teacher, a librarian, and a bookseller, but those are stories for another time. She is the author of The Secret of Isobel Key (NA 2013) and Daughter of Chaos (YA 2014).


BOOK LABYRINTH GIVEAWAY:
US addresses only.
a Rafflecopter giveaway


TOUR WIDE GIVEAWAY:
US addresses only. Prize is a Heathergems heart necklace, graciously donated by Heathergems.
a Rafflecopter giveaway

You can follow along with the rest of the tour HERE.