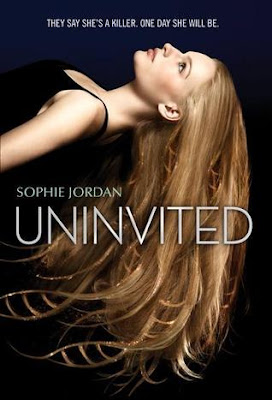 My Thoughts:
My first notes for writing this review = “Soooo good!!” That basically sums up how I feel about this book. It was amazing, and you should all definitely check it out. You want to hear more? Alright, I’ll try to describe all the things I loved about Uninvited. I picked up the book because I was completely intrigued by the concept, however I know that a great concept does not always equal great execution. Thankfully Sophie Jordan plays out the concept in such an awesome way, and the book totally lives up to how it sounded.

I love it when books raise all kinds of questions, and that is totally the case here. It’s all about nature versus nurture, and the role that science plays. You have statistics which show that people with a particular gene are more likely to become killers, but you also see our main character, Davy, who is just a normal girl. The way that people treat carriers of the gene is terrible, ostracizing individuals who, before the test results, were their best friends, their family, their neighbours. It’s interesting to see how this gene almost becomes a self-fulfilling prophecy, with carriers put in positions where lashing out is the lesser of evils, or their only choice, really.

This book worked so well for me because of all the emotions it brought about. I felt so much for Davy, her being someone who starts off very privileged and is suddenly a second class citizen. As a reader you’re outraged on her behalf, completely appalled at the way she and other carriers are treated. Meeting the other carriers was an interesting thing. You see those individuals who have a sense of “bad” about them, and you can see why society would want them locked away, but then you also have those like Davy who have been thrown into this craziness without doing anything wrong.

I loved Davy’s character because she doesn’t always react how you would expect her to, as our heroine. She’s a bit of an "everygirl", someone who tries to be brave, but doesn’t always want to step out. Davy worries about consequences and doesn’t like to stir the pot. She was refreshing to read about, actually, because I think that her responses (wanting to stay under the radar up until that isn’t possible) are like how regular people would behave in that situation.

Overall this was such an enjoyable book, one that really takes you on a journey. I’m so excited for the sequel, to see where Sophie Jordan will take readers next.

The Cover:
Seems cool but kind of regular until you see her hair. LOVE!!