Into the Parallel by Robin Brande 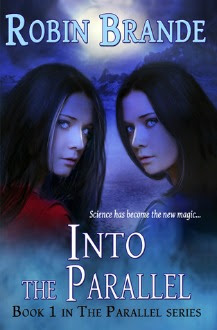 Synopsis: (from Goodreads)
Science has become the new magic . . . High school senior and amateur physicist Audie Masters has discovered what no other physicist has been able to prove: that parallel universes do exist, and there is a way to journey into them. She also discovers something else: a parallel version of herself, living the kind of life Audie never could have imagined for herself. Now Audie is living that life, too, full of adventure, romance, and reality-bending science. It’s all more than she could have hoped for--until something goes wrong.

My Thoughts:
This was such a perfect read at a perfect time for me. Robin Brande writes in such an awesome straightforward manner. I love how it felt like Audie, the main character, was speaking right to the reader. The best thing about this book is that there's actually science behind the science fiction. Most books to do with parallel worlds or time travel tend to gloss over the specifics, but Brande brings scientific theories right to the foreground. No worries, though, if you're not a science geek. You'll still be able to understand and appreciate all the science-y information being brought forth. Mostly it was just refreshing to see a science fiction title actually rooted in science.

'Into the Parallel' introduces a sort of Fringe-like parallel world to the one Audie is living in. There are people who look alike, but who have different names and different personalities. I loved all the differences between the 2 universes, as well as the differences between the look-alike characters themselves. I don't want to say much more because reading the book is an incredible journey on its own. I have yet to be disappointed by Robin Brande. I can always count on her books to contain great characters and interesting, issue-driven plots. 'Into the Parallel' was refreshing and absolutely satisfying, leaving me desperately wanting Book 2.

The Cover:
Love it! The colouring makes it a little bit spooky looking to draw you in, but it also perfectly represents the story.

Find Into the Parallel by Robin Brande on Goodreads. Available at Smashwords, Kindle, Nook, or in Paperback.