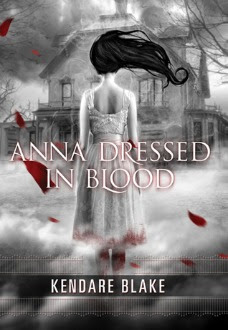 Cas Lowood has inherited an unusual vocation: He kills the dead.

So did his father before him, until his gruesome murder by a ghost he sought to kill. Now, armed with his father's mysterious and deadly athame, Cas travels the country with his kitchen-witch mother and their spirit-sniffing cat. Together they follow legends and local lore, trying to keep up with the murderous dead—keeping pesky things like the future and friends at bay.

When they arrive in a new town in search of a ghost the locals call Anna Dressed in Blood, Cas doesn't expect anything outside of the ordinary: move, hunt, kill. What he finds instead is a girl entangled in curses and rage, a ghost like he's never faced before. She still wears the dress she wore on the day of her brutal murder in 1958: once white, but now stained red and dripping blood. Since her death, Anna has killed any and every person who has dared to step into the deserted Victorian she used to call home.

And she, for whatever reason, spares his life.

My Thoughts:
I'm having a hard time writing up my thoughts about why this one is so great. It totally kept my interest, and I just wanted to keep reading it. When I wasn't reading it I was peeking over at the book thinking "Hmm, when can I read some more?" So, to me, that's an indication of an awesome book.

Basically I think this one is just so unique and interesting. Cas is a ghostbuster, though he would smack you if you called him one to his face. There's the name connection with Supernatural, and I have to say that Cas's personality, with his wry sense of humour, and his vocation totally reminded me of the show. It even had that perfect creepiness that wasn't too scary. (And believe me, I am a total scaredy cat).

Interestingly enough I didn't totally buy the romance angle of the story. Honestly, I loved the connection between Cas and Anna, but taking it to the level of romance was weird to me. I don't know, I'll have to think about it more. So Cas and Anna were awesome, but so were all the supporting characters. They all came together to form a crazy cool ghost-busting Scooby gang, and all their interactions were quite fun.

Basically I appreciate how funny and interesting this one was, even amongst creepier and darker moments. Plus I was totally psyched with the Ontario setting, even though I've never actually been anywhere even close to Thunder Bay. Not my typical read, but everyone convinced me of how awesome this one was, and after reading it? I totally agree.

The Cover:
I think it's pretty awesome and creepy!