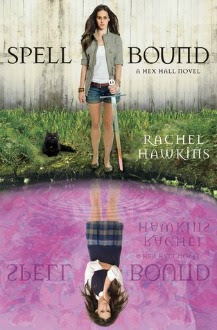 Synopsis: (from Goodreads)
Hailed as “impossible to put down,” the Hex Hall series has both critics and teens cheering. With a winning combination of romance, action, magic and humor, this third volume will leave readers enchanted.

Just as Sophie Mercer has come to accept her extraordinary magical powers as a demon, the Prodigium Council strips them away. Now Sophie is defenseless, alone, and at the mercy of her sworn enemies—the Brannicks, a family of warrior women who hunt down the Prodigium. Or at least that’s what Sophie thinks, until she makes a surprising discovery. The Brannicks know an epic war is coming, and they believe Sophie is the only one powerful enough to stop the world from ending. But without her magic, Sophie isn’t as confident.

Sophie’s bound for one hell of a ride—can she get her powers back before it’s too late?

My Thoughts:
There is a lot to like about this book and about this series, especially when you consider the characters. Sophie is adorable, punchy, sarcastic, and strong. I think she's relatable, despite her great power, because she's kind of like an every girl and someone to aspire to all wrapped up in one person. She feels things we all feel, but then she makes the choice to rise above and do what is brave and right.

The thing about this volume of the series is that there is a lot happening, almost too much so. The book has a frenetic pace to it, where it seems like greater details are glossed over. The romance aspect isn't really my favourite either, because the love triangle is just kind of strange. See, Cal is awesome and sweet and I totally dig him, but does it ever really feel like he has a chance with Sophie? Sophie and Archer are together with real feelings, so what's the point of having Cal as a third wheel? I understand Cal liking Sophie, but from Sophie's POV the more-than-friendship feelings seem almost forced.

I know this was supposed to be a trilogy, but I'd be surprised if there weren't more Hex Hall books after this. It felt like there were too many loose ends at the end of the book, especially with new characters who had been introduced without any resolution to their stories. The series just doesn't feel done, so I'm interested to know if more books are (or have been?) announced. I really liked the humour of the first two books, and thankfully that does continue in this one. Plot-wise I don't think this book is as strong as the previous two, but it's still very enjoyable. I like Sophie as a character, and if there were more books I would definitely be interested in reading further in the series.

ETA: I just found out there will be a Hex Hall spin-off. (See here, also). Makes sense, I think!

The Cover:
It's not my favourite (doesn't the girl look scary thin?!), but I do enjoy the continued theme from the previous covers.